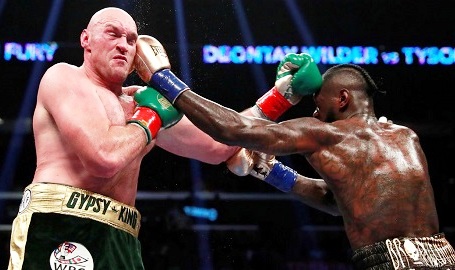 The first fight between the two ended in a draw. The rematch ended in a Tyson Fury TKO victory, but Deontay Wilder accused Fury of cheating. Fury says he is going to “cheat” again to defeat Wilder in their upcoming trilogy fight.

The two fight for the third time Saturday in Las Vegas.

“You know what, I’m going to cheat again, because I’m going to smash his face in. So according to him that’s cheating, because he’s not supposed to lose,” Fury said on a podcast Monday with Ariel Helwani.

“I loaded my gloves with horseshoes and dynamite,” Fury later added.

Wilder hasn’t been hesitant to accuse Fury of cheating. In a Twitter post on Oct. 31, 2020, after their rematch, Wilder said he saw Fury getting help with his gloves.

“I’m going to cheat again. … I loaded my gloves with horseshoes and dynamite.”

“I saw in the first fight when Ricky Hatton was pulling down your gloves to put your hand in the improper position,” Wilder said in the video. “Y’all tried the same method the second time, but this time you scratched flesh out of my ears which caused my ears to bleed.”

Wilder says there must have been something hard in Fury’ gloves because it left injuries to the side of his head.

“It’s the reason why the side of my face swelled … and it left a dent in my face as well” Wilder said in the video.