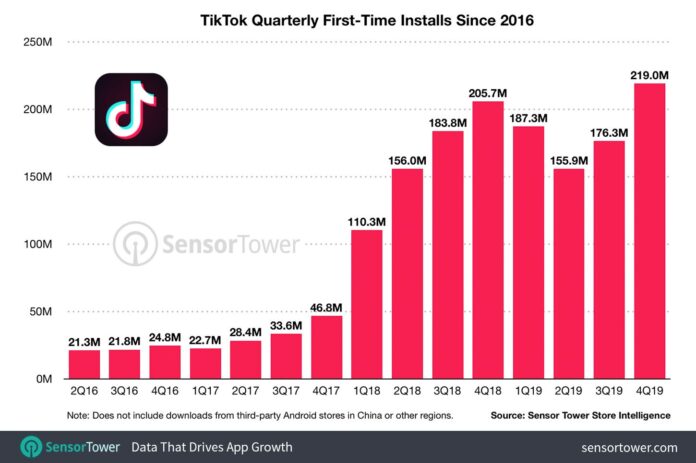 Video sharing platform TikTok continues to skyrocket in popularity with more users downloading the application on both Android and iOS platforms.

Interestingly, the application popularity appears not to be impacted by recent legal woes in the United States.

Data presented by Stock Apps indicates that in September 2020, TikTok recorded about 23.21 million downloads across the top ten countries.

The United States registered the highest downloads at 6.1 million.

The research also overviewed TikTok’s downloads from the Apple App Store and Google Play worldwide in September 2020, by country.

The United States recorded the highest downloads on the App Store at 3.79 million. Elsewhere, Brazil had 3.08 million downloads from the Google PlayStore platform making it top in the world.

TikTok popularity unscathed with potential United States ban
Since its inception, TikTok has gained popularity among young people. The app’s appeal enables users to create, share, and view content based around lip-syncing, dancing, comedy skits, and other physical activities.

Despite being released back in 2016, TikTok snowballed in popularity around 2018 and 2019 after the parent company embarked on strategic marketing targetting young content creators.

TikTok has evolved to become the go-to launchpad for memes and internet culture since its launch. It took over the United States by storm to the surprise of many social media players. The application is now available in about 150 countries with support for 75 languages.

Despite facing the possibility of being banned in the United States, the country is still the leading market for the application as of September.

TikTok came under investigation by the United States authorities over allegations of sharing user data with the Chinese government. However, TikTok operations will continue running after U.S President Donald Trump gave a node to a deal with Oracle and Walmart.

The deal will see the companies own a combined 20% stake in TikTok Global. The company will be headquartered in the United States.

Furthermore, the United Kingdom also launched investigations on how the app was using data. The rising concerns about TikTok came in the wake of the app’s growing popularity. This year, the popularity was boosted by the coronavirus pandemic where people were looking to escape the boredom of lockdown.

Other factors driving TikTok’s global popularity
TikTok’s popularity has also been driven by the fact that despite being a global app, it has a strong focus on localized content. The app often runs local contests and challenges and captures local trends through the use of local hashtags and languages. Additionally, the app leverages local trending hashtags to suggest topics for content creators. This capability enables the application to capitalize on local trends and generate viral content for the app.

For example, in November 2018 Facebook launched a standalone video-sharing app called Lasso aimed to take on the TikTok’s core market.

However, the platform did not last.

Facebook has a reputation for cloning popular social media applications that are deemed as competition. Despite closing Lasso, the company has had success adding popular features from rivals into Instagram and the regular Facebook app.

With TikTok’s popularity, leading global brands are now considering the platform as an advertising platform.

However, other brands have expressed skepticism regarding the popularity as they are not sure if it will last long.

It is worth mentioning that TikTok’s popularity is astonishing but it is not a guarantee that it will reach the levels achieved by other platforms like YouTube. To maintain its popularity, TikTok needs to keep innovating and find new ways to engage users.

Additionally, TikTok will have to make the platform more marketing-friendly for brands to establish the app as a social network that will last.

ABOUT JUSTINAS BALTRUSAITIS
Justin is an editor, writer, and a downhill fan. He spent many years writing about banking, finances, blockchain, and digital assets-related news. He strives to serve the untold stories for the readers.