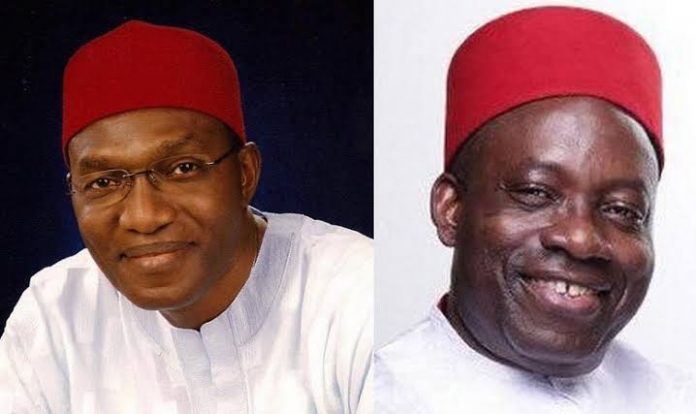 The Chukwuma Soludo Gubernatorial Campaign has challenged the purported candidate of the All Progressives Congress (APC) in the November 6 governorship candidate, Senator Andy Uba, to flag off his campaign in a big way, as Professor Chukwuma Charles Soludo, the All Progressives Grand Alliance (APGA) candidate, did on Saturday, September 25 at Alex Ekwueme Square in Awka, the state capital.

“The APC purported candidate has been running away from the good people of Anambra State for weeks because he is afraid of his own shadow in the state”, the Soludo Campaign stated in a statement in Awka today signed by C. Don Adinuba, the Communications Director of the Campaign who is also the Anambra State Commissioner for Information and Public Enlightenment.

Uba suspended rallies on September 30, claiming that it was due to the security situation in the state.

But the Soludo Campaign dismissed the claim, saying the suspension has nothing to do with the state’s security.

“After all, Professor Soludo, who was attacked on March 31 in his hometown of Isuofia in Aguata Local Government Area while addressing a large number of youth in the town and in the process lost three gallant police officers, is holding huge rallies all over the state, touring two local government areas daily, together with the fearless Anambra State governor, Chief Willie Obiano.

“Uba is very afraid of Anambra people, the very people he wants to rule by all means”.

Adinuba continued: “In fact, his fear of ndi Anambra borders on phobia because of what he has done to the state since his days in the President Olusegun Obasanjo administration when the state witnessed abduction of the sitting governor and his so-called resignation from office, as well as the forced movement of the governor to the Okija shrine in the dead of the night to swear an oath of critical and perpetual allegiance to a tiny clique of so-called godfathers, the mayhem of November, 2003, in which almost all institutions of the state were burnt down in broad daylight and the signing of the notorious Irrevocable Standing Payment Orders (ISPOs) through which billions of naira were starched away by a tiny clique of politicians whom Chinua Ache memorably described as ‘renegades determined to turn my home state of Anambra into a lawless and bankrupt fiefdom’.

By claiming that the security situation is not good, according to Mr Adinuba, Senator Uba and his group are passing a vote of no confidence on President Muhammadu Buhari who is the Commander in Chief of the Armed Forces and to whom all security and intelligence services in the country are answerable.

The statement rather claimed that Uba’s inability to hold a big rally where his campaign will take off formally “springs from his growing unpopularity and outright rejection not only by the people of Anambra State but also by top members of his own party, including President Buhari, Vice President Yemi Osinbajo, Labour and Employment Minister Chris Ngige who is the APC founder in the state and National Inland Waterways Authority chief executive George Moghalu”.

The Soludo Campaign recalled that on the two occasions the APC in Anambra State announced last month that President Buhari would flag off its gubernatorial electioneering effort, the President ignored the party.

“Even when it announced that Vice president Osinbajo would flag off the campaign in September, in Onitsha, Professor Osinbajo ignored those using his name in vain because, as a Christian pastor, he didn’t want his name to be soiled by Uba who emerged the APC candidate in a sacrilegious manner.

“No one person voted in the alleged primary election as no electoral materials were brought to Anambra State.

“Anambra State has long passed this kind of gangster politics”.