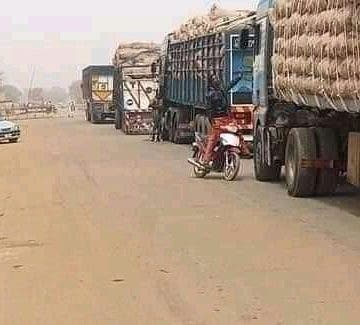 The Nigeria Army through the Defence Headquarters on Friday cleared Jebba and Mokwa border roads in Kwara and Niger states, as some northerners stopped truck loads of foodstuffs including cows, tomatoes, onions, pepper and other commodities from entering the southern part of the country.

A group known as the Amalgamated Union of Foodstuff and Cattle Dealers of Nigeria reportedly took the action to enforce an indefinite strike it declared recently to protest “the failure of the government to address the alleged killings of its members in parts of the country”.

In a video being circulated online, a long line of trailers conveying agricultural goods owned by Fulani cattle merchants, were reportedly stopped from entering the Jebba town, Kwara State border town with Niger State on their way to the South-West on Thursday.

In a swift reaction, the Defence Headquarters deployed joint troops comprising the military and other security agencies to clear the Jebba – Kaduna road.

The acting DHQ spokesman, Brig. Gen. Onyema Nwachukwu, in a statement on Friday, clarified that following the tension generated by the incident, joint troops comprising the military and other security agencies were deployed to clear the Jebba–Kaduna road and have since restored normalcy in the general area.

According to the statement: “The Defence Headquarters has been notified of a video trending on social media indicating that trucks and other similar vehicles conveying agricultural products from the North, heading towards the southern part of the country were being prevented and turned back along Kaduna-Jebba road by some unscrupulous elements.

“The Defence Headquarters wishes to clarify that following the tension generated by the incident, joint troops comprising the military and other security agencies were deployed to clear the Jebba –Kaduna road and have since restored normalcy in the general area. There is currently free flow of traffic along the axis.”

Credible source revealed that the stoppage might not be unconnected with the threat of the national body of Miyetti Allah Cattle Breeders Association of Nigeria to stop its members from supplying and selling cattle to the South if the alleged eviction of Fulani herdsmen was effected by some governors.

Speaking with one of our correspondents on the development on Friday, the Financial Secretary of the AUFCDN, Kabiru Salisu, said a task force set up by the union was enforcing the stArike in Niger State and other areas.

He said the government had not reached out to the union on its demands, hence the strike which he said was indefinite.

Salisu said, “There is a task force that we set up to enforce the directive by the union that there would be no transportation of cattle and foodstuffs to the South with effect from Thursday. So, the union set up the task force to prevent sabotage.

“In the communiqué we issued, we said the strike would start yesterday (Thursday), and so, we have started the strike. Now, there is no loading of commodities to the South, but those who attempted to violate the directive were stopped in Niger State.”

Asked to react to a statement by the Defence Headquarters that it prevented “some unscrupulous elements” from stopping agricultural products being taken to the southern part of the country, Salisu said the issue did not concern the military.

“Those vehicles stopped in Niger State are still there; they won’t be allowed to move to the South,” he vowed.

The union’s President, Muhammad Tahir, had complained during a press briefing last Sunday that foodstuff and cattle dealers had continued to suffer intimidation, humiliation and destruction of their goods.

He said the union complained about the situation to the Federal Government, security services and the National Assembly without results, stating that it would embark on a strike if nothing was done to stop the killing of its members.

Tahir demanded N450bn compensation from the government for the losses suffered by the union members and the dismantling of illegal roadblocks on the highways.

Also, confirming the stoppage of cattle and foodstuffs to the South on Friday, the Coordinator of Miyetti Allah in Kwara State, Aliyu Mohammed, said the development was true.

Mohammed also claimed that his members were being killed.
‌
“We are not doing anything wrong and yet our people in the forests are being killed for no just cause,” he said.

However, the spokesperson for the state police command, Ajayi Okasanmi, said the command was not aware of such developments in the state.

Meanwhile, leaders of Jebba community in the Moro Local Government Area of Kwara State have said they will carry out an eviction of all unregistered herdsmen in the community on Sunday.

Speaking with journalists in Ilorin on Friday, the son of the Oba of Jebba, Prince Ibrahim Adebara, said the eviction directive would be carried out on some herdsmen who had been trying to settle in the area after the ultimatum given to them had lapsed.

He said, “As a result of the activities of bandits, insurgents and kidnappers being chased from some neighbouring states, the community decided, with the help of some of the identified and registered herdsmen, to ask the new ones to leave.

“Even those who had been living with us said they couldn’t vouch for the new settlers. So, they are being asked to leave to maintain existing peace. They are staying at Mofara village in Jebba community here. They will be driven away on Sunday and they are already aware of that.”

In a related development, the Niger State Sector Commandant of the Federal Road Safety Corps, Musa Mohammed, has said the ongoing unrest at the Jebba-Mokwa road has nothing to do with an ethnic war or political affiliations, but a disagreement between road transport unions.