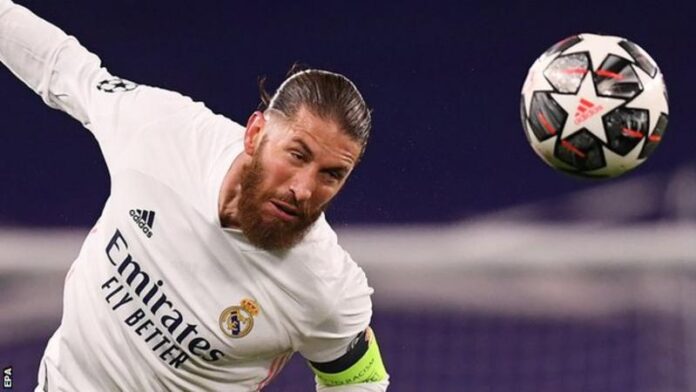 Sergio Ramos has been left out of Spain boss Luis Enrique’s Euro 2020 squad.

Real Madrid centre-back Ramos, 35, has been struggling with injury and has only played one game since the end of March.

His absence means there are no players from Real Madrid picked by Enrique for this summer’s delayed tournament.

Manchester City defender Aymeric Laporte had his switch from France to Spain approved by Fifa recently and he makes the 24-man squad.

He is one of 10 players from the Premier League picked by Enrique, including Brighton keeper Robert Sanchez, Leeds United defender Diego Llorente and Wolves forward Adama Traore.

Ramos played for Spain in World Cup qualifiers in March when he was substituted during a draw with Greece and came on late in a win over Kosovo.

Since then, his only appearance for Real Madrid came in a Champions League semi-final second-leg defeat by Chelsea on 5 May.

That outing was only his fifth for the Bernabeu club this year.

“It was a very difficult decision but he [Ramos] has not been able to play this season and has hardly trained since January,” said Enrique.

“I called him yesterday [Sunday] – it was hard, difficult.

“I feel bad, because he is very professional and he helps the national team a lot. And he can still help it in the future. But I have to look for the best for the squad.”

Ramos, in a post on social media, said it “hurts” that he would not be representing Spain at the Euros but hoped the team have a “great” tournament and that he would be “another fan cheering on from home”.

“I have fought and worked every day, in body and soul, to be able to reach 100% for Real Madrid and the national team but things don’t always work out the way we’d like,” said Ramos.

“It pains me not to have been able to help my team more and not to play for Spain but, in this case, the best thing to do is rest, fully recover and come back next year like we’ve always done.”

Enrique could have picked a 26-man squad instead of the usual 23 after Uefa brought in the change to lessen the load on players after a club season compressed because of the coronavirus pandemic.

The tournament is taking place between 11 June and 11 July, having been delayed by a year because of the coronavirus pandemic.

Spain are in Group E along with Poland, Slovakia and Sweden.

Sergio Ramos has only played seven games in 2021. They had a long chat and he hasn’t been able to train or play so it was decided he was not needed. He hasn’t used the 26 players as he thinks the 18 or 19 is all that usually gets used. There are doubts – in goal, the full-backs – right-back especially.

I know Luis Enrique very well and I see a guy who is very brave, who wants to entertain, who wants to be aggressive and pressure and attack and attack. Because only one team can win, if he guarantees that (entertainment) it is better than what we have seen in the last three tournaments.

In the past three tournaments, Spain were not good and didn’t play well. We have to shake off the past. It is a young side with a lot of talent but doesn’t have the experience, the knowhow of other squads. But it is going to be entertaining.