Romance fraud scammers duped their victims of over N90 billion ($218 million) in 2020, according to a new report.

Nigerian fraudsters fleeced victims of online dating scams of $16.8 million (about N7 billion) in 2020, the report by Techshielder adds.

The report also analysed various hotspots for online dating scams and placed Nigeria in the second position after Philippines.

It said a total of $218m was lost to online dating scammers by victims across the world.

The report shows that the Philippines run the highest amount of dating scams, this is followed by Nigeria and then Canada

A whooping $218 million has been lost to dating scams worldwide that work out to be an average loss of $17,661 per a victim

A massive 20,282 catfishing scams have been reported In the United States

Techshielder has analysed international and domestic reports to find the place you are most likely to fall victim to a dating scam, as well as the monetary loss per victim. 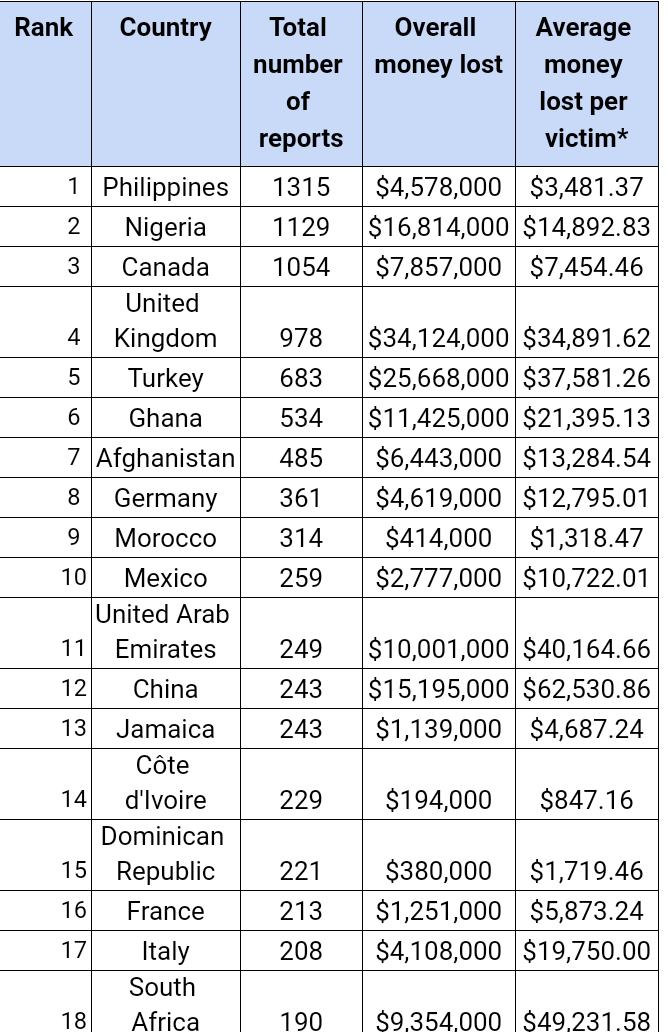 Finding love online can be difficult – especially if the person you trusted turns out not to be who they said they are.

Catfishing scams also known as dating scams or romance scams, have seen a huge increase over the course of the pandemic. Fraudsters have not only left many people broken-hearted but also have left their pockets empty.

Catfishing has been defined as creating a fake profile to attract someone online. Fraudsters befriend victims over the internet in the hope that they can get them to send money. It should be noted that catfishing is not always a romantic relationship, it can also come in the form of family, friends, or business relationships.

But where in the world are you most likely to be catfished?

Interested to know where the catfish hotspots are, Techshielder has analysed the data to find where the biggest fraudsters live, the cities with the highest number of victims and how much money is lost to find the places you should avoid when looking for love.

The research found that during the year 2020, dating scams cost the world a massive $218 million, which works out to be an average loss of $17,661 per victim. It turns out that the Philippines is responsible for the highest number of dating scam cases.

Over 1,300 romance fraud cases have been reported against the country, and they are responsible for a whopping $4 million in financial loss.

The table below shows the top 10 countries that have been reported for catfishing scams the most:

*The average amount of money reported lost by victims was calculated by dividing the overall money lost by the number of reports.

Ranking in second place is Nigeria. With a population of 201 million, the West African country has accounted for 1,129 reports of scams. The total amount of money lost due to Nigerian dating scams is a staggering $16.8 million, this totals to an average loss per victim of $14,892.

Rounding off the top three is Canada. The world’s second-largest country has taken $7.8 million out of love-seekers pockets and has broken 1054 hearts due to catfishing.

At the other end of the scale, we have the European country of Iceland. The nation has only accounted for a total of 1 case of dating scam and has stolen no money at all.

A huge driving force for dating scams is the financial gains for the fraudsters. They build trust with the victims with the aim of getting them to send money under false pretences.

“In today society, it’s normal to meet and build a relationship online, especially during a pandemic.

If you are dating over the internet, looking for the one, it’s important to be on your toes, so you can spot when something amuck. They are people out there who will take advantage of those looking for love, thus before you fall for the whirlwind that is love or send any money, look out for any red flags.

If it’s too good to be true, then it usually is.”

Sam Omatseye As A Kept Man

World U20 Athletics: Nigeria hopeful as Championship begin in Cali