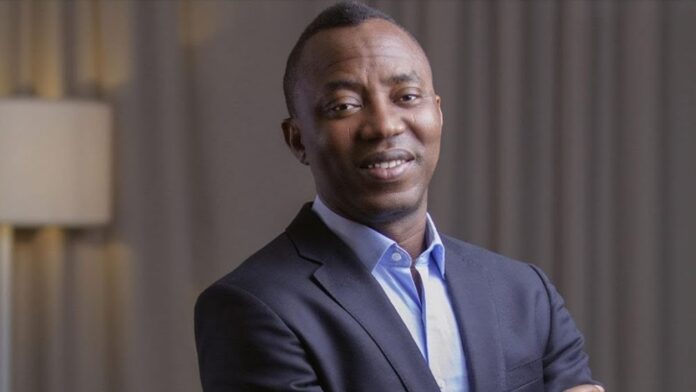 Human rights activist, Omoyele Sowore, has filed a lawsuit against Chief Superintendent of Police, Altine Hyelhira Daniel who shot at him while he was protesting to demand an end to insecurity in the country.

This was made known by the activist on his Facebook page on Friday.

He added that he also filed a lawsuit against the Divisional Police Officer of the Federal Secretariat Police Station who illegally arrested him while attending the trial of the leader of Indigenous People of Biafra (IPOB), Nnamdi Kanu at the Federal High Court in Abuja.

He wrote, “On May 31st 2021 a Nigeria Police Force officer CSP Altine Hyelhira Daniel directed by the Muhammadu Buhari regime, shot me at close range with a riot gun at the Unity Fountain in Abuja, soon as she carried out the dastardly act she ran away with the RRS police contingent under her command.

”Today, I took a decision for the sake of posterity to file a lawsuit against her and the police authorities at the Federal High Court in Abuja!

“Also, on July 26th 2021, another police officer, the Divisional Police Officer of the Federal Secretariat Police Station and his Divisional Crime Officer violently arrested me while pointing a gun at me for attending Mazi Nnamdi Kanu’s trial at the Federal High Court in Abuja. These police officers must be brought to justice or justice brought to them! #RevolutionNow”

READ: Biden Reacts Over ISIL Kabul Attack As US Suffers Worst Casualty Since 2011
In May, Sowore alongside some other peaceful protesters had gathered at the Unity Fountain, Abuja. But he was shot by Daniel.

The activist was said to have been speaking with a detachment of police officers stationed at the public facility when the female officer fired at him.

Many people also sustained varying degrees of injury during the incident. Sowore was said to have been rushed to an undisclosed hospital.

The lawyer said Buhari’s administration had declared war on the civic space.

He said, “Omoyele Sowore has just been shot by a female police officer at the Unity Fountain in Abuja. He is being taken to the hospital for treatment.

“The officer fired a tear gas canister directly at his right thigh. Sowore was specifically targeted. The criminal officer is said to be CSP Altine. I watched Sowore being shot live on Facebook.

“This is what Nigeria has been turned into under Buhari. They’ve declared war on the Civic Space. The FCT Police Commissioner has fenced the Unity Fountain with iron and cables to prevent protests.

“This is a criminal offence under the Anti-Torture Act of 2017.”

Also, on July 26, Sowore who was at the Federal High Court in Abuja for the trial of Nnamdi Kanu was illegally arrested.

Sowore, along with many journalists and others, who had hoped to attend the proceedings was denied entry into the court premises.

He said at the time, “I have just been arrested by the Nigerian Police at the Federal High Court.