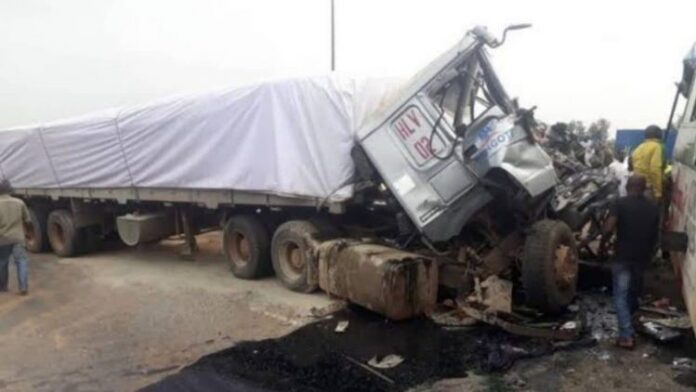 Four people were on Sunday burnt to death while 10 others escaped in an accident in Ogun State after a 14-passenger bus was engulfed by fire.

According to eye witnesses’ account, a tanker laden with Black Oil was spilling its content on the road due to a leakage and the driver had to stop when fellow drivers drew his attention to this.

To avoid the unforseen, the traffic officials in the axis had to divert and re-route traffic so that traffic inbound Benin can join the outbound traffic section to save other vehicles from having contact with the spilled content which had covered the length and breadth of the inbound section.

It was gathered that the driver of the bus which was travelling on top speed allegedly disobeyed the warning at the diversion point and chose to drive on the Black Oil not minding the consequences.

In the process, the vehicle was said to have lost control, and ran into the bush hitting a tree.

The impact of the accident was said to have resulted into the vehicle being engulfed by fire which burnt four of the passengers to death out of the 14 onboard.

Ten other passengers were said to have escaped the incident before the arrival of law enforcement officials.

At press time, the Divisional Police Command was said to have taken over the matter while the tanker driver was in Police custody.

The Public Relations Officer, Ogun State Traffic Compliance and Enforcement Agency TRACE, Babatunde Akinbiyi, who confirmed the incident to Vanguard called on drivers particularly commercial vehicle drivers to cooperate and show understanding with traffic managers so as to make the roads safe for all.