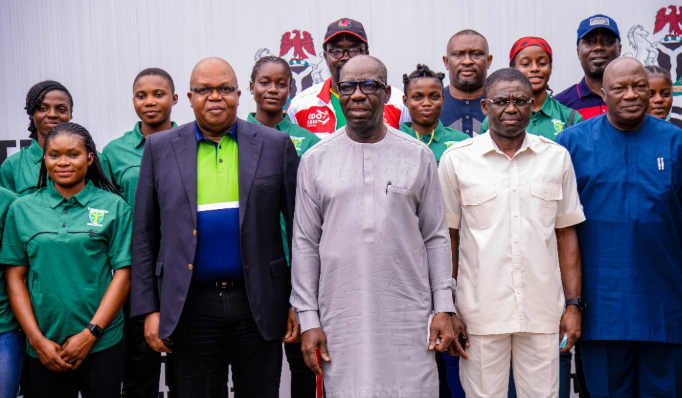 Edo State Governor, Mr. Godwin Obaseki, has reiterated his administration’s commitment to sports development in order to positively engage youths in the state.

Obaseki gave the assurance when he received the Chairman, Edo Cricket Association, Mr. Uyi Akpata, who led the National Female Cricket Team, on a courtesy visit at the Government House, Benin City.

The governor reassured that his government will sustain investment in sports, ensuring an enabling environment for sports to thrive.

According to him, “We are very clear in Edo that this is the way to go; first, to understand that the role of government in sports, like any other area, is to create an enabling environment. Government has a catalytic role to create what is required for sports to grow.

“That is why we are setting up our Federation to encourage sports by collaborating with the private sector; we have done that successfully with cricket. We have taken it a step further to encourage other sports like lawn tennis, swimming, gymnastics and other sports that we are traditionally good at in Edo.

“We also believe that our role is to create world-class facilities, which is why we have made a huge investment in sports infrastructure across the state and we will continue to do so. Aside from the total revamp of the Samuel Ogbemudia Stadium, we have built over 20 standard football pitches across the state.”

Reassuring his government’s efforts to positively engage youths in the state, Obaseki further stated: “We have also engaged in activities to catch our young men and women very early in life, to get them interested in these sports and participate actively to get to their peak globally.

“As a state, we want to assure you that this is just the beginning; we will continue to improve our facilities, as we don’t want Botswana and other African countries to perpetually host these games; we want to host them in Benin.

“We will continue to offer our facilities to the federal government for the training of our athletes ahead of major tournaments. Most of the facilities used at the Tokyo 2020 Olympics are right here at the Samuel Ogbemudia Stadium.

Wishing the team success in their forthcoming games, the governor said: “You have been here for training and enjoyed your stay; you are going out to represent the country; you are going to be our ambassadors, I wish you good luck.”

Earlier, Akpata commended the government for its support to the team in the last two weeks, adding that the governor has created the right environment for the game of Cricket to thrive.