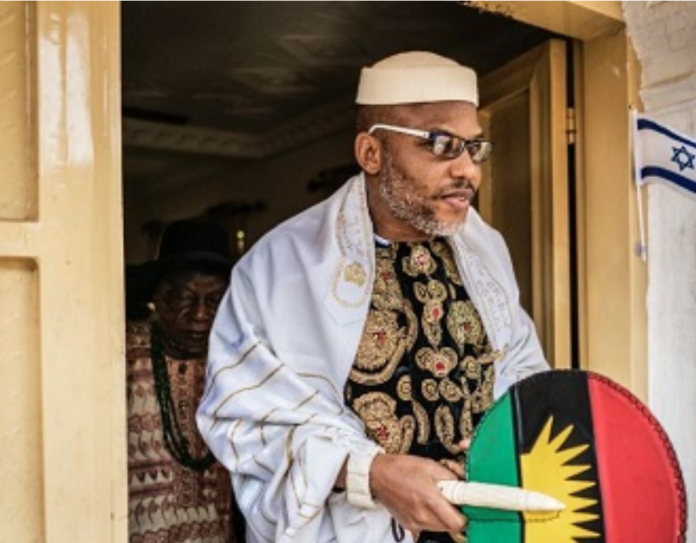 There is palpable fear and tension in the Southeast over resumed trial of the leader of the Indeginous Peoples of Biafra (IPOB), Mazi Nnamdi Kanu today, October 21, 2021.

Ahead of the trial, the UK government had issued a travel advisory to its citizens against travelling to the Southeast over what it termed “heightened security presence.”
In the advisory, the government predicted the possibility of a crisis in the region as a result of the resumed trial.

The UK government pointed out the increasing protests and killings followed by the sit-at-home order as the reasons its citizens should apply constraints in travelling to the Southeast.

Following the rearrest of Kanu, the Southeast had witnessed increased insecurity which linked to IPOB and the Eastern Security Network, ESN. But the separatist group had on several occasions denied being responsible for the menace.

A self-acclaimed disciple of Kanu, Simon Ekpa, warned of a possible revolution from the Southeast due to the handling of Kanu’s trial.

Ekpa warned the Nigerian government that the handling of Kanu’s trial may lead to a “ruthless and destructive revolution.”

In a tweet, Ekpa wrote: “How you handle Mazi Nnamdi Kanu on 21.10.2021 will determine the future of terrorists controlled Nig, before its disintegration. The outcome of the court, whether the trial holds or not, will determine how the coming revolution will be, whether ruthless or destructive revolution.”

Similarly, the Movement for the Actualization of the Sovereign State of Biafra (MASSOB), warned of the possibility of civil disobedience and total economic and social lockdown against the Nigeria state over Kanu’s matter.

MASSOB’s leader, Comrade Uchenna Madu, said failure to produce Kanu physically in court on Thursday would prove that the IPOB leader has been killed in DSS detention; and this could spell doom.

A Twitter user noted that palpable tension is in the air in Abia State ahead of the trial.

“You can sense fear in Abia and the Southeast ahead of Onyendu’s trial. Anything can happen tomorrow, I’m sure the entire Southeast would be locked down. The fear of what may happen is very serious,” Uchechukwu tweeted.

However, Emma Powerful, an acclaimed spokesman of IPOB, downplayed the possibility of the Southeast experiencing a crisis due to Kanu’s trial.

Speaking with DAILY POST, Powerful expressed hope, saying there would be no crisis across the Southeast.

According to Powerful: “IPOB issued an order of sit-at-home on the day Kanu will be in court in Abuja, no other sit-at-home for now and our people will comply in solidarity with our leader and the Biafra struggle.

“They have been doing that for a long time without molestation and force. They are doing it out of love for Nnamdi Kanu and support for the struggle for Biafra freedom and we are not foreseeing any violence anywhere in Biafra land because our people love Biafra and Biafra loves them, unless Nigerian government and security agents device a means to kill our people and tag them IPOB.

“Everybody has seen such acts on the side of Nigeria and because they don’t know what to do to IPOB, they resort to killing innocent Biafran and blame that on IPOB. Before now, you know how Nigeria security agents were killing innocent citizens under the guise that they were killing IPOB members and ESN. There will be no crisis; we believe that.”