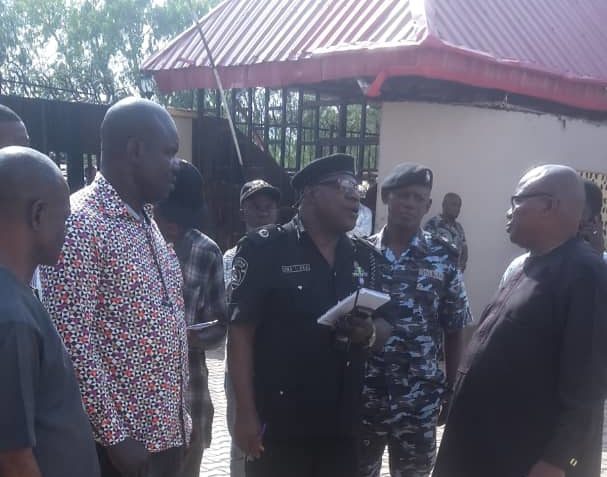 Investigation revealed that the Hotel owned by former Governor Sam Egwu and Senator representing Ebonyi North Senatorial district was on Monday sealed by officers and men of the National Drug Law and Enforcement Agency, NDLEA in the State.

The sealing of Grace court Hotel, according to unconfirmed sources was based on the alleged discovery of ‘hard’ drugs within the premises of the Hotel. When Vanguard visited the hotel alongside other Journalists, the hotel was under lock and key as nobody was allowed in or out of the hotel premises in Abakaliki.

NDLEA was seen positioned inside the premises of the hotel even at its entrance to chase customers and onlookers away from the vicinity hotel.

When newsmen made effort to chat with a top-ranking officer in charge of NDLEA operations at the Hotel, the officer was unfriendly and rude to Newsmen as he ordered them (Journalists) to leave the environment in their interest.

“We will reach out to the media as soon as we are done. An investigation is on the real reason the hotel was sealed. If we need the press, we will contact them.”

Many are still wondering why the change of name took effect within the period under review.

Efforts made to reach Senator Egwu proved abortive as he didn’t pick his call or reply to text messages sent to his phone. “Good morning Your Excellency. I visited your hotel – Gracecourt and discovered that it has been sealed. Please, I would like to get a brief reaction from you as am busy working on the report. Thanks for your usual cooperation!”