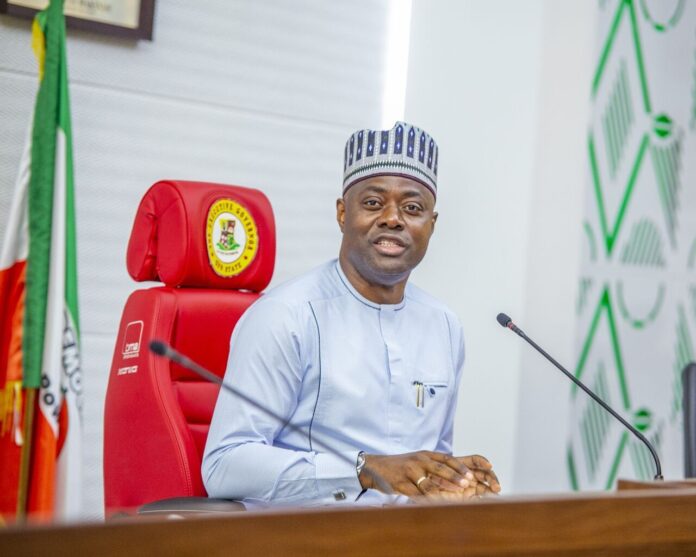 Oyo State Governor, ‘Seyi Makinde, on Friday, swore-in the seven commissioner nominees who were reappointed into the cabinet, charging them to keep raising the bar of governance.

The governor, while speaking at the swearing-in ceremony held at the Executive Chamber of the Governor’s Office, Secretariat, Agodi Ibadan, stated that names of the remaining commissioners would soon be made public.

He equally charged the reappointed commissioners to explore more innovative ways to deliver on their mandate and positively touch the lives of the good people of the state.

A statement by the Chief Press Secretary to the governor, Mr. Taiwo Adisa, quoted the governor as saying that the composition of the whole cabinet will be completed in the next few weeks.

The statement added that six of the reappointed commissioners retained their former Ministries, while the immediate past Commissioner for Women Affairs, Alhaja Faosat Ajoke Sanni was deployed to the Ministry of Special Duties.

Speaking at the event, Governor Makinde said: “Two years ago, I inaugurated the first State Executive Council with 14 members initially and the number eventually grew to 17. The cabinet was dissolved about a month ago. All of you here who have been reappointed Honourable Commissioners were members of that cabinet.
“Well, as they say, ‘you don’t change a winning team.’ Yes, that is true. But they didn’t say that we should not reassess our team. In fact, regular assessment and reassessment are important to keep teams working optimally. So, to all seven of you here today, I will say welcome back.
“I hope you have used the time to get enough rest and you are fully reinvigorated now for the task ahead. You have just under two years left to make even greater marks in your various Ministries.”
Governor Makinde, who maintained that his administration will continue to take development to all the nooks and crannies of the state, said his government has done massive works along the four pillars upon which the roadmap to Accelerated Development in Oyo State 2019-2023 is built.
“Our administration has become known for sustainable development in all sectors, with no communities left behind. We want to continue to do even more than what we have done before.
“I met people and once they tell me they are from Oyo State, I ask them the geopolitical zone they are from. And once they tell me, I ask them if they have seen so and so projects in their communities. So, that is what we are known for. It is even development all across the state and that is where we really want to be.
“Two years ago, I spoke to you about the key roles you will play in ensuring that our people partake of Omituntun. “Today, there is clear evidence of the massive works we have done in the four pillars upon which our Roadmap to Accelerated Development in Oyo State 2019-2023 is built.
“Yes, we have done so much already but this is not the time to rest on our oars but think of more innovative ways to deliver on our mandate and positively touch the lives of the good people of Oyo State.
“When we complete our tenure in office, we will have set a new bar of governance in Oyo State and I believe that by that time, I would have one or two things to learn from yourselves. You have taken a break and now you are back.
“I remember that over a year ago, they said everything we were doing was audio. Then, I actually enjoyed being the ‘audio governor.’ For me being audio, they are acknowledging the visuals and by the time we are done, they will understand that we have set a new bar on governance.
“I was recently talking to a brother-governor and he said to me that, first, they called you audio. Now, they are saying we are seeing what you guys are doing. But then, they ask if those things are sustainable. We have sustained payment of salaries for our workers and pensioners in the state for over two years. So, they will constantly be shifting their position until they have nowhere else to shift to,” the governor added.
He equally stated that the new commissioners will all need to play their part in ensuring that emphatic and service-oriented leadership becomes the norm in the state, saying: “The people of Oyo State will no longer be dragged down to the days of mediocre leadership. You all have a role to play in ensuring that ’emphatic’ leadership becomes the new normal in Oyo State and, by extension, Nigeria because the whole country is watching. We should not relent but keep raising the bar.
“Of course, we have provided the channels to ask questions. I will also continue to ask questions to ensure we remain on the path to sustainable development in the state. So, when I am holding you accountable to a very high standard, it is because some of you will go beyond the current leadership role to something even higher.
“So, I urge you to rededicate yourselves to your positions. We have presented your scorecard before the state House of Assembly, which was a prerequisite to your reappointment. I want you to look at that assessment and ask yourselves if that was indeed your best. Are there ways you can serve the people better? Ask yourselves how you want to be remembered. Revisit the answers quarterly and measure your activities against your goal.
“This is a sure way to self-correct any inadequacy you may notice.
“In the next few weeks, we will have the whole cabinet once more. Our goals will remain the same. We will do everything in our power to move Oyo State from poverty to prosperity. So, I congratulate you on your appointment. Let us do it again.”