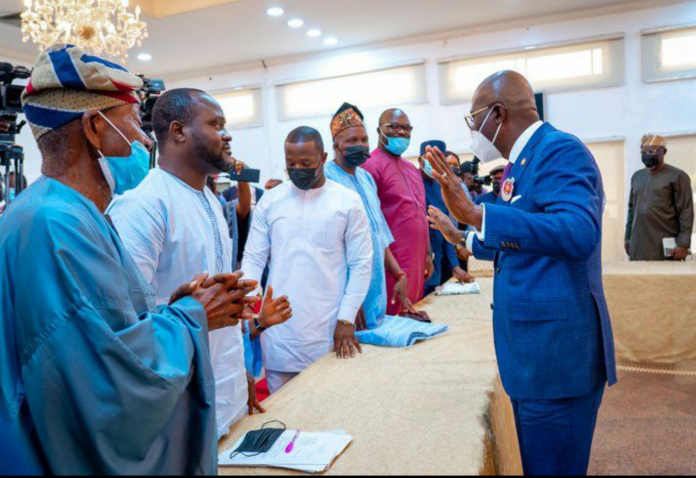 Lagos State Governor Babajide Sanwo-Olu on Wednesday met with members of the Shangisha Landlords Association over a recent Supreme Court judgment empowering them to take over upscale Magodo Estate.

The meeting was also attended by their lawyers, Commissioner of Police Lagos State Command, Policemen from the F.C.T Command and Police Headquarters, the Executive and Trustees of the Magodo Residents’ Association and senior Government Officials.

The move by the landlords to reclaim 549 plots of land in the estate in line with the judgment had elicited controversy even as an attempt by a senior police officer from Force Headquarters, Abuja leading a detachment of policemen to enforce the verdict on Tuesday elicited a verbal confrontation with the governor.

A comnunique issued by the Commissioner for Information and Strategy, Gbenga Omotosho, reads: “At a meeting chaired by Mr. Governor, Mr. Babajide Olusola-Sanwo-Olu, at the State House Alausa, on the 5th of January 2022 with the Judgment Creditors (Shangisha Landlords’ Association), their lawyers, Commissioner of Police Lagos State Command, Policemen from the F.C.T Command and Police Headquarters, the Executive and Trustees of the Magodo Residents’ Association and senior Government Officials, the enforcement of Judgment of the Supreme Court delivered on the 10th of February 2012 in suit no. SC/112/2002 was deliberated upon and the following resolutions were arrived at:

1. That the Committee set up by the State Government to resolve the Magodo dispute, chaired by the Hon. Attorney General and Commissioner for Justice, is to meet with the Judgment Creditors (Shangisha Landlords’ Association) on Friday 7th of January 2022.

2. The Surveyor-General of Lagos State, Permanent Secretary Lands Bureau and Hon. Commissioner for Physical Planning and Urban Development are to immediately identify available plots of land within the Shangisha village scheme.

3. The Committee is also to identify how the available plots of land are to be accessed and whether any infrastructural development is necessary to access the land.

4. Upon identification of available and accessible land, the State Government is to immediately allocate the land to the 549 Judgment Creditors.

5. In the event that there is no available and accessible land within the Shangisha village scheme to allocate to all the 549 Judgment Creditors, the State Government, in agreement with the Judgment Creditors, will provide alternative plots of land.

6. Whilst this exercise is ongoing, the Nigeria Police are to restrain themselves from any conduct or action that may instigate violence or breakdown of law and order in Magodo. They should be keepers of peace and act within the confines of the law – always. All the parties have agreed to an amicable resolution of the matter.

7. The meeting ended with Mr. Governor thanking all for attending and restating his resolve to ensure that peace returns to Magodo and that there is justice for all.

8. The attendees praised the Governor for showing “good leadership”, which they said prevented violence in the estate. Besides, they expressed confidence in the Governor’s ability and sincerity to resolve the matter.”