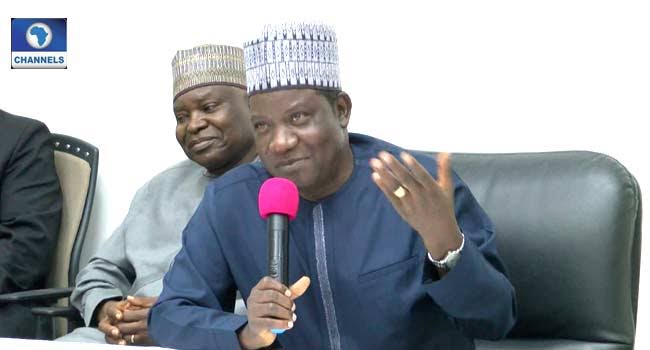 Plateau State Governor, Simon Lalong, on Monday attacked some governors for evacuating indigenes of their states from University of Jos.

The curfew in Jos North is to be from 6pm to 6pm while in Jos South and Bassa, the curfew will run from 10am to 6pm.

In a statewide broadcast, Lalong lambasted the governors for engaging in a “panic rush,” noting that UNIJOS students were not under añy security threat.

The governors of Lagos, Kaduna, Ogun, Kogi, Gombe, Abia, Oyo and Enugu are among those who have evacuated indigenes of their states from Plateau State.

However, Lalong said President Muhammadu Buhari had given the assurance that more troops would be deployed in the troubled areas.

He said the conflicts were merely criminal activities and had nothing to do with ethnicity or religion.

He also accused sections of the media of stoking the embers and inciting the people of the state to sustain the conflicts.

He said he had met with leaders of the Irigwe ethnic nationality and the Fulani to urge them to end the clashes between their people.

“1. My dear citizens of Plateau State, it is with a heavy heart that I address you today over the security situation in Plateau State. Events of the recent past have cast a dark shadow on the progress and huge investments we have made in peace building and crime fighting within the last six years.

2. Due to recent attacks in Jos North, Bassa, Riyom, and Barkin Ladi we have witnessed the unfortunate disruption to the peace and security of the State by criminal elements leading to loss of innocent lives, properties, farm crops and livestock.

3. Despite the directive to security agencies to stop the attacks, arrest perpetrators and bring them to justice, these attacks continued with the incident in Rukuba Road where commuters were attacked leading to other deaths and destruction. The ugly situation again resurfaced in Yelwa Zangam village of Jos North Local Government where many people were again killed and properties destroyed.

4. While arrests have been made in most of these incidents, the constant threat to lives and properties necessitated the imposition of curfew on Jos North, Bassa and Jos South Local Government Areas to enable security agencies properly deploy to handle the situation and stop further breakdown of law and order.

5. At this point, I wish to commiserate with the entire citizens of the State over these sad developments. I particularly extend my deep condolences to the families of those who lost loved ones, as well as those who sustained injuries and lost properties during the carnage. I have directed that Government pays the medical bills of those who are receiving treatment in various health facilities.

6. As a result of these occurrences, I convened a high level stakeholders meeting where traditional, political, community and religious leaders gathered to brainstorm on how to bring an end to this cycle of violence. Thereafter, I held separate meetings with leaders of Irigwe Land as well as Fulani Community to further engage them on lasting solutions to the protracted conflict within the area.

7. It is important to state that we have had several engagements with them in the past and made efforts to ensure that peace prevails in the area. Between January and July this year, the Plateau Peace Building Agency has conducted over 34 mediation engagements at community levels in Miango, Kwall, Dusten Kura, and Gyelobari Districts of Bassa LGA.

8. In response to the attacks, I also held meetings with the Plateau Inter-Religious Council and directed them, along with the Peace Building Agency to swing into action by carrying out more consultations and engagements to defuse tensions, calm nerves and dig deep into the immediate and remote causes of these conflicts with a view to bringing the ugly situation to an end.

9. From the engagements so far, it has again become clear that all these attacks are purely criminal activities that must be treated as such. Even though they are quickly given ethno-religious connotations, there is no justification for the killing of anyone human being. We are a society that is guided by rules which do not permit anyone to take the laws into his or her hands no matter the grievances.

10. Yesterday I visited Yelwa Zangam village of Jos North Local Government to see things for myself and commiserate with the families of those affected, as well as reassure them that Government will stop at nothing to apprehend other fleeing suspects behind the attacks. We are determined to ensure diligent investigation and prosecution to give them justice.

11. To forestall further occurrences, I visited and met with the President in Abuja to seek for more deployment of security forces and equipment to enhance the capacity of our law enforcement agencies to protect our people. I received assurances from the President that the request will be acted upon immediately.

12. Arising from my discussion with Mr. President, I had a meeting with the Minister of Humanitarian Affairs, Disaster Management and Social Development as well as the DG of the National Emergency Management Agency regarding humanitarian assistance to the victims of the various attacks. I received commitment that very soon, relief materials will be delivered to us.

13. Already, the State Government has procured relief materials which are being distributed to the victims in various locations. On Friday, the Peace Building Agency also delivered relief materials donated by USAID to displaced communities in Bassa. We shall continue to partner with more humanitarian organisations towards alleviating the suffering of the victims.

14. My dear citizens, our long term goal is to foster dialogue, collaboration, understanding and proactive dispute resolution mechanisms that will make it difficult for people to resort to criminality in the name of self-help and reprisals whenever there is any disagreement. Those who fail to follow lawful means to settle their grievances should be ready for a showdown with Government as we will never tolerate killings and destruction of properties under any guise.

15. During these trying times, I have watched with great disappointment the unfortunate comments and utterances of some citizens including religious, political and community leaders from within and outside the State who rather than calm nerves and join hands with the Government to ensure the quick restoration of peace, resorted to pushing out ethno-religious sentiments that further created tensions.

16. Some sections of the mainstream and social media also chose to play to the gallery and fanned the embers of hatred and disunity.

17. However, majority of media platforms performed their duties diligently and highlighted Government’s efforts in discharging its constitutional obligation of ensuring the safety of lives and property.

18. I must commend people of conscience across different faiths, ethnic and political backgrounds that have remained objective, dispassionate and resolute towards condemning the criminal actions of the attackers and offering useful suggestions to Government on ways to improve public safety.

19. I wish to thank friends of Plateau State from far and near who sent words of encouragement and played various roles in calming nerves as well as refuting false narratives about the wrong perceptions and exaggeration of the situation.

20. Specifically, I wish to thank the Governor of Kebbi State His Excellency Atiku Abubakar Bagudu who led a delegation of the Progressives Governors Forum to condole the State and make donations to victims. At the same time, he demonstrated exemplary solidarity by declining to join the panic rush of evacuating students from the University of Jos by some State Governments. His approach of confidence building and collaboration affirms the fact that Plateau State still remains a home to all.

21. Let me therefore use this opportunity to assure parents of students studying at the University of Jos that we are working with the University authorities to ensure the safety of their wards as soon as the school reconvenes. In the same vein, I have assured the management of the NYSC that the Government will partner with them to guarantee the safety of Corps members posted to the State.

22. After my visit to Yelwa Zangam village, I took a tour of the Jos metropolis to see things for myself. I also engaged the security agencies to review the general security situation in the three Local Government Areas where the curfew was imposed, as well as other parts of the State. At the end of the review, Government took the following decisions.

i. The curfew in Jos North is to be relaxed. Beginning from Monday 30th August 2021, the curfew shall be enforced from 6pm to 6am until further notice.

ii. The curfew in Jos South and Bassa is to also be further relaxed. As from Monday 30th August 2021, the curfew shall be enforced between 10pm to 6am until further notice.
iii. The Ban on Tricycles (Keke NAPEP) and hawkers remains in force within Jos/Bukuru metropolis.

iv. The Plateau Economic and Investment Summit earlier scheduled for the 1st and 2nd of September 2021 has been postponed. A new date will be announced and communicated to all our invitees. We apologise for any inconveniences this postponement might cause.

23. Fellow citizens of Plateau State, we are facing a very difficult moment and we must work together to overcome. There is an obvious plan by those who desire to see Plateau in perpetual crises to employ all divisive methods to achieve their objectives. We must not allow them to use politics, religion, and ethnicity to divert our attention from their criminal activities.

24. My determination as your Governor is to ensure that I encourage all citizens to embrace one another and use peaceful means to settle any disagreement. I shall continue to ensure that we build the capacities of our security agencies including the Operation Rainbow, the newly trained three thousand vigilantes, as well as our traditional institutions to be able to respond promptly and effectively to criminals so that we can enjoy peace and tranquility.

25. Finally, I call on all citizens of Plateau State to work in synergy and promote the long standing ideals of accommodation, tolerance, love, hardwork godliness and forgiveness which we are known for. Plateau State remains the Home of Peace and Tourism.
26. God bless Plateau State and the Federal Republic of Nigeria.”