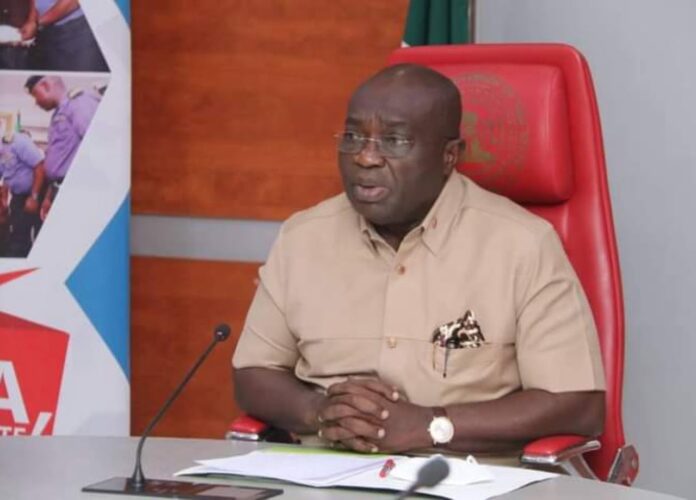 He also said the lawmaker is ”battling with occasional fits of schizophrenia which manifests in making careless, dishonorable, unrelated and incoherent statements”.

He was reacting to comments made by the senator during plenary on Tuesday.

Senator Adeyemi, who was making his contribution to a motion on the urgent need for the restoration and revalidation of the Safe School Initiative in Nigeria, said the people of Abia State are governed by drunkards.

The senator, who represents Kogi West on the platform of APC also referred to the current Abia State Governor, Okezie Ikpeazu, as a ‘champagne drinking man’.

“In some states of Nigeria today, where we have highly intelligent people, highly educated people, very enterprising people, like Abia they are governed by drunkards. The governor of Abia is a champagne drinking man.

Shortly after reporters contacted him for his rebuttal, the Chief Press Secretary (CPS) to the Abia State Governor, Onyebuchi Ememanka, released the statement where he said the senator is suffering from a ”protracted case of mental illness”.

Mt Ememanka said, ”the urge to ignore the senator became irresistible judging from the total disconnect between the matter being discussed by the Senate and the comments made by the senator as they affect the governor”.

”If Senator Adeyemi was of sound mind he should know that Abia State is ahead of Kogi in terms of educational achievements.”

He also noted that there has not been one single case of an attack on any school in Abia State.

“It is obvious that Senator Adeyemi is battling with acute dementia and has lost every one of his instincts as a journalist. If not, he would have known that just last week, the National Bureau of Statistics adjudged Abia State as No. 3 on the list of states that attracted foreign direct investments, with only Lagos and Abuja ahead of Abia State in the entire country.

“It takes much more than drinking champagne to guide a state from zero foreign investments to No. 3 in the country. Kogi State featured prominently on the list of states that attracted zero investments. It is only a state that is peaceful and secure that has the capacity to attract such cross-border investments,” Mr. Ememanka furthered.

The CPS also questioned the silence of the senator when the National Center for Disease Control (NCDC) branded Kogi State unsafe “for their consistent lip service to the COVID-19 pandemic.”

“Yet, he has the effrontery, or rather, the buffoonery, to abuse a governor whose state has maintained one of the lowest COVID-19 fatality rates in the country through proactive measures to protect our people.

“Between a governor who has consistently denied the existence of COVID and the one who has put in place measures to protect his people, one wonders who is the drunkard,” he said.

Mr. Ememanka also said that the Governor is sober and that he was also quite surprised by the sudden outburst of the senator with whom he had no prior relationship.

”Mr. Ikpeazu does not take alcoholic drinks and is shocked at the schizophrenic outbursts of Senator Adeyemi whom he has never met nor had any dealings whatsoever with officially nor privately,” Ememanka said.

He said save for the parliamentary privilege on the senator, he (Adeyemi) ”would have been put to the strictest proof of his wild and senseless comments before a court of law”.

Many have condemned the use of uncouth language by the senator, and others have said that the Senator failed to address the matter that was being discussed at the plenary.