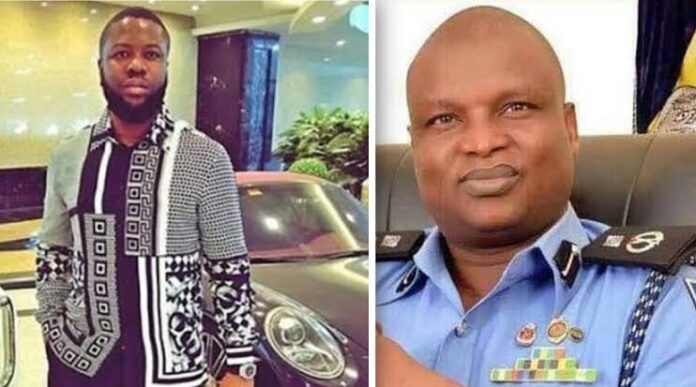 The Inspector-General of Police Alkali Baba, on Saturday recommended the suspension of the head of the Intelligence Response Team, DCP Abba Kyari, over his alleged ties to Nigerian-born fraudster, Ramon Abbas aka Hushpuppi.

The IGP issued the advice in a letter to the Police Service Commission, according to a statement by Force Public Relations Officer, DCP Frank Mba.

According to US court documents, Hushpuppi alleged that he bribed Kyari to arrest one Vincent Chibuzo, a co-fraudster.

The Instagram celebrity said he gave the top cop money to arrest and jail “one of his rivals in Nigeria after a dispute over a $1.1 million scam on Qatari business people”.

But Kyari denied any wrongdoing, saying he never collected money from Hushpuppi.
Advertisement

In a statement on Sunday, Frank Mba, police spokesman, said the IGP in a letter dated July 31 and addressed to the Police Service Commission, explained that the suspension of the officer is in line with the internal disciplinary processes of the force.

“The IGP further noted that the suspension is also expected to create an enabling environment for the NPF Special Investigation Panel to carry out its investigations into the weighty allegations against DCP Abba Kyari without interference,” Mba said.

“The suspension is without prejudice to the constitutional presumption of innocence in favour of the officer.”

Mba said the probe panel will be led by Joseph Egbunike, deputy inspector-general of police in-charge of the Force Criminal Investigations Department (FCID).

“The SIP, inter alia, is to undertake a detailed review of all the allegations against DCP Abba Kyari by the US Government as contained in relevant documents that have been availed of the NPF by the Federal Bureau of Investigation (FBI),” he said.

“The SIP is also to obtain detailed representation of DCP Abba Kyari to all the allegations levelled against him, conduct further investigations as it deems fit, and submit recommendations to guide further actions by the force Leadership on the matter.”