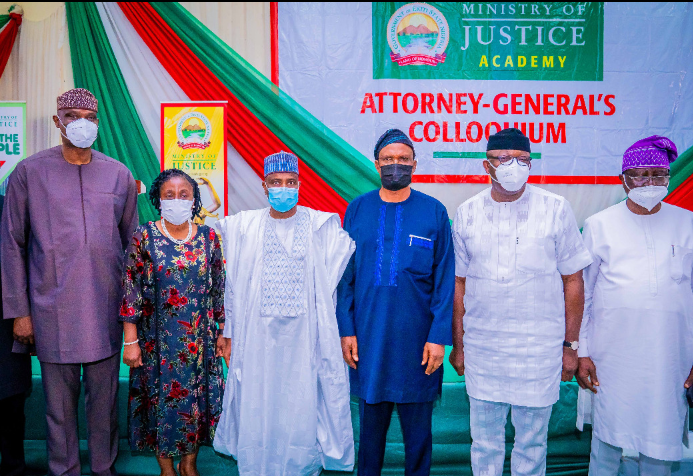 Nigerian Governors have reached a consensus to set up an implementation structure to grant the judiciary power to manage its capital and recurrent expenditure in line with constitutional provisions, Sokoto State Governor, Rt. Hon Aminu Waziri Tambuwal stated this in Ado-Ekiti on Wednesday.

This is as Ekiti State Governor and Chairman, Nigeria Governors’ Forum (NGF), Dr Kayode Fayemi assured that States would adhere strictly to agreement reached with representatives of National Judicial Council (NJC) and representatives of the Speakers of Parliament on autonomy of the judiciary and legislative arms of government.

Governor Tambuwal presented the perspective of the NGF at a special Attorney General’s Colloquium held in honour of the retiring Chief Judge of Ekiti State, Justice Ayodeji Daramola in Ado-Ekiti.

Tambuwal, who was the Guest Speaker at the event stated that the autonomy of the judiciary was critical to the sustenance of the country’s democratic process, adding that some of the conflicting areas of the Executive Order 10 which mandated the implementation of judiciary and legislative autonomy across states of the Federation, were being addressed.

He said the delay in the implementation of financial autonomy for the judiciary was simply a matter of procedure, governance structure and the quest for legal clarity.

The Sokoto State Governor, who is NGF’s Vice Chairman, however disclosed that the Governors have agreed to put up an implementation structure that will enable the judiciary have power to manage its capital and recurrent expenditures in accordance with the provisions of the constitution.

Tambuwal said the agreement would end the long weeks of strike by Judicial workers which has halted judicial and criminal justice process in the country.

“The recent misunderstanding on the financial autonomy of the Judiciary is predicated on the need to establish an implementation framework to the 4th Alteration of the 1999 Constitution of the Federal Republic of Nigeria in Section 121(3). What we have questioned, and we have made this known at every opportunity, is the process of implementing this provision of the Constitution.

“The Presidential Executive Order No 10 of 2020 is a unique piece of regulation which we believe deserve highest scrutiny if we must uphold the federal principle which forms a fundamental feature of our Constitution. This is the basis for our engagements with relevant stakeholders at various levels as well as our participation in the Technical Committee, which was constituted to explore how to implement financial autonomy granted by the Constitution.

“We are happy that a consensus has finally been reached on this matter. The agreement allows a period of 45 days for implementation structures to be put in place across States including the enactment of a Fund Management Law which will grant the Judiciary the power to manage its capital and recurrent expenditures in accordance with the provisions of constitution.

Budgetary releases to the judiciary will be pro-rated based on the actual revenues recorded each month by the State government.

Monthly revenue reconciliation and allocation will be presided over by a State Account Allocation Committee (SAAC) to be set up under the Fund Management Law – a similar practice to what we have at the federal level.
On his part, Dr Fayemi said the NGF had never at any time opposed the autonomy of the judiciary but seek legal clarification on the provision of the law on who should be responsible for the capital funding of the judiciary.

According to Dr Fayemi, “the Nigeria Governors’ Forum has reached an agreement with representatives of National Judiciary Council and representatives of the Speakers of Parliament on the issue of autonomy for judiciary and legislature.

“For us we will adhere strictly to what we have signed on to but there is a salient point that my brother, Governor Tambuwal mentioned about whose responsibility really it is to take charge of the capital funding of the judiciary.”
Speaking further Governor Fayemi promised that his administration would continue to hold judiciary in high esteem considering its role towards dispensation and administration of justice in the State.

The Governor who highlighted some of the achievements made under the watch of the outgoing Chief Judge to include exit of Ekiti from reference to Ondo State law, enactment of criminal Justice Act, (CJN), civil procedure, rules of courts and others, expressed optimism that Justice Daramola would continue to be a fountain of knowledge and wisdom to the State on judiciary and other matters.

Earlier Justice Daramola who lamented the poor conditions of courts across the country, revealed that the review of salaries of judges had been on stalled for the past 15 years contrary to the provision of the law for its review at the interval of every five years.

He blamed governors, especially those with legal background and those who were former legislators for the plight of the judiciary as well as the controversies surrounding the agitations for autonomy for judiciary and legislature.

The event which was well attended by members of the bars and the bench members of the State House of Assembly and executive councils of Ekiti and Sokoto states, also had law undergraduate law students from universities within .