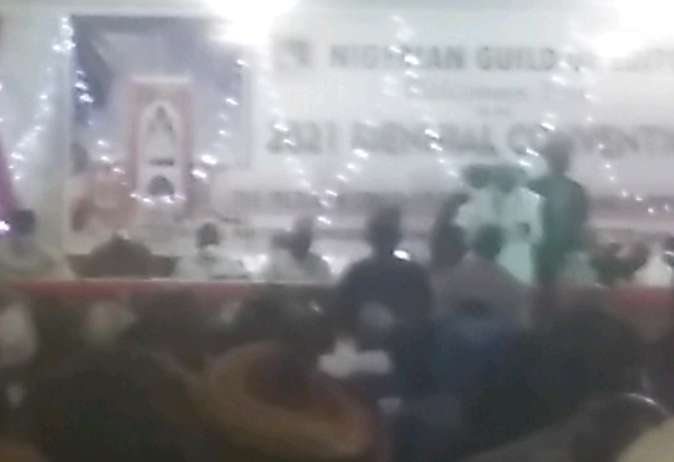 Kano State Governor, Abdullahi Ganduje, on Monday declared the 2021 Biennial Convention and Election of the Nigerian Guild of Editors open in the state capital, Kano.

The theme is: ‘The Media In COVID-19 Era: Challenges and Opportunities.’

The governor, in his speech, said the choice of Kano for the event was not “by accident.”

He gave the assurance to editors of their safety.

He urged the editors to conduct their election with utmost integrity as “politicians are watching you.”

He also urged editors to match freedom of the press with responsible reportage, adding that the Nigerian media is one of the freest in the world.

He described the theme as one of the most poignant topics raised during the pandemic  and urged the media to help in uniting Nigerians and fighting against tendencies pushing it towards the brink.

In his speech, NGE President, Mustapha Isah, enumerated challenges faced by journalists in the COVID-19 era.

Also present were the Senior Special Assistant to the President on Media and Publicity, Mallam Garba Shehu; a former governor of Ogun State and NGE Fellow, Aremo Olusegun Osoba; the President of the Nigerian Union of Journalists, Chris Isigizo, among others.

A large number of editors from across Nigeria is in attendance.

The over 600 members of the Guild are also expected to hold a general election into all  its 16 Executive and Standing Committee offices.

Isah, who completed the two-year second term of former President, Mrs. Funke Egbemode after she was appointed as the Commissioner for Information in Kano State, is running for a second term against a former National Secretary, Mrs. Victoria Ibanga.