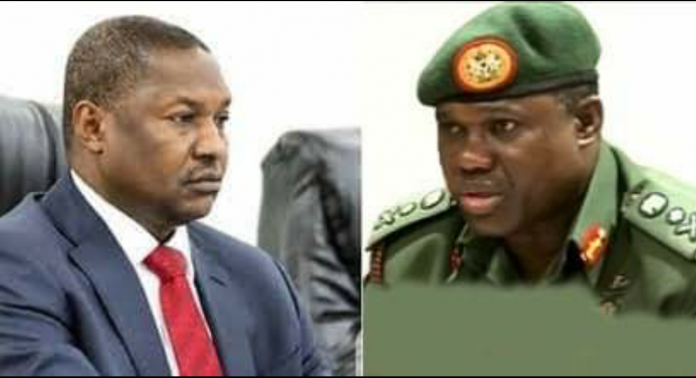 Attorney-General of the Federation (AGF) and Minister of Justice Abubakar Malami has asked a former Chief of Army Staff (COAS), Lt.-Gen. Kenneth Minimah (retd.) and two other senior Army officers to submit themselves for trial over a N13.8 billion fraud case instituted against them.

Malami faulted the argument by Gen. Minimah, Maj.-Gen. A. O. Adebayo (ex-Chief of Accounts and Budget, Nigerian Army) and Brig.-Gen. R. I. Odi (ex-Director, Finance and Accounts, Nigerian Army, that they were only subject to military laws.

He argued that a trial before the court was the best opportunity for them to prove their innocence in respect of the allegations raised in a charge filed by the EFCC before the High Court of the Federal Capital Territory (FCT).

In a statement of defence filed in a suit by Minimah, Adebayo and Odi, the AGF argued that the plaintiffs, being Nigerians, were subject to both military and civil laws and could be prosecuted by the Economic and Financial Crimes Commission (EFCC) and other prosecuting agencies in the country.

He said: “The plaintiffs are citizens of Nigeria, resident in the Federal Republic of Nigeria and subject to Nigerian laws.

“The plaintiffs can be charged in any of the courts of superior record by any agency, body or organisation empowered law to do so for any breach of any of the laws of the Federal Republic of Nigeria.

“The second defendant (the EFCC) is an agency established by an Act of the National Assembly and it is empowered to investigate and prosecute financial crimes and related cases.

“The second defendant can exercise its statutory duty in relation to the plaintiffs. A suit in any court of superior record affords the plaintiffs the opportunity to defend themselves, and the plaintiffs should embrace same if they have nothing to hide.”

The AGF then urged the Federal High Court in Abuja (before which the suit, marked: FHC/ABJ/CS/1595/2020 is pending) to dismiss it.

The EFCC had, upon receiving the report of the Committee on the Audit of Defence Equipment Procurement in the Nigerian Armed Forces (CADEF) chaired by Air Vice Marshal (AVM) Jon Ode (retd.), set up by the Federal Government, conducted investigation and found that about N13,789,619,309.00 was misappropriated by Gen. Minimah, Maj.-Gen. Adetayo and Brig.-Gen Odi.
-The Nation