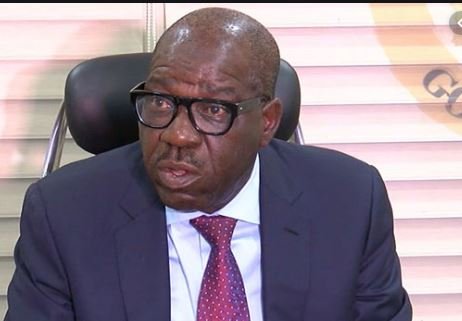 Obaseki of the Peoples Democratic Party is being accused of forging his certificates by his opponent in the last governorship election in the state, Osaze Ize-Iyamu, of the All Progressives Congress.

The All Progressives Congress (APC) and one of its members in Edo, Williams Edobor, had in the suit alleged that Obaseki forged the University of Ibadan degree certificate he submitted to the Independent National Electoral Commission (INEC) in aid of his qualification for the September 19, 2020, governorship election in the state.

In the suit marked FHC/B/CS/74/2020, the Plaintiffs also alleged that there were discrepancies in the subjects that Obaseki claimed he passed in his West African Examination Council (WAEC) examination and subjects in his testimonial.

Obaseki, his People’s Democratic Party (PDP), and INEC are listed as defendants in the suit.

At the resumed hearing of the suit on Tuesday, the defendants opened their defence.

The defendants called their first witness, Charity Aguobawekhina, to attest to the originality of the documents.

Under cross-examination, Aguobawekhina told the court that he was the one that photocopied Obaseki’s certificate that was attached to the nomination form submitted to INEC.

He told the court that the photocopy was made from Obaseki’s original certificate.

“It is true my lord that part of Exhibit D4 was not captured by the photocopier, ostensibly because the size of the original certificate is bigger than the A4 paper that was used,” the witness said.

“I did not know that the photocopy did not reflect all the parts of the certificate until it became an issue.”

He added that Obaseki’s nomination form was uploaded into INEC’s portal on June 29, 2020.

The defendants called the University of Ibadan as their second witness. The institution confirmed to the court it issued a Bachelor of Arts certificate to Obaseki in 1979, but that the photocopy he submitted to INEC was incomplete.

The university, which was summoned through a subpoena issued on it by the court, said it was not true that the governor forged the certificate he attached to Form EC9 (Nomination Form) he submitted to the electoral body.

The institution was represented by its Deputy Registrar, Legal, Abayomi Ajayi.

Under cross-examination, Ajayi said: “I will not regard it as forged, but I will regard it as an incomplete photocopy.”

“This is because the certificate issued by the University is larger than the paper size on which the photocopy was done. In the process, the date of issue and signature of the Registrar, S. J. Okudu was cut off, likewise the signature of the then Vice-Chancellor, Professor Tekena Tamuno,” the witness added.

He noted that demonstrations the school carried out revealed that some part of the certificate was cut off, owing to the size of paper that was used.

Ajayi went ahead and tendered three different versions of a Bachelor of Arts degree belonging to another student, which the school photocopied in A3, A4 and A5 papers, to buttress the point.

Counsel to the plaintiffs, Akin Olujimi, SAN, opposed the admissibility of the photocopied certificates.

He stated that the documents were not frontloaded. But the judge dismissed the objection and admitted the exhibits.

He held that reliance on the exhibits in the court’s judgement would be subject to objection the plaintiffs would raise in their final written address.

Justice Mohammed adjourned the case till Wednesday for the continuation of hearing.

Earlier on Monday, the plaintiffs closed their case against the governor after calling their sixth witness.

Under cross-examination by the counsel to Obaseki, Ken Mozia, SAN, the plaintiffs’ expert witness, Raphael Onwuzuligbo, who is a retired Assistant Superintendent of Police and a forensic document examiner, informed the court that the University of Ibadan’s logo on the governor’s certificate appeared to have been compromised.

He added that the signature of the Vice-Chancellor of the university was missing from the certificate not because the document was poorly scanned but that it was actually missing.

Reacting to the testimony, Olujimi stated that the words of the witness further proved their case against Obaseki.

The plaintiffs are praying the court to declare that Obaseki’s claim in his INEC form EC9 at column C, sworn to on June 29, 2020 at the Federal Capital Territory High Court Registry to the effect that he obtained from the University of Ibadan in 1979, a Bachelor of Arts Degree in Classical Studies, is false and contrary to Section 31 (5) and (6) of the Electoral Act, 2010.

They also want an order declaring that the governor lied on oath when he swore to an affidavit on June 29, 2020 that he worked in Afrinvest Limited from 1994 to 2014 when he retired.

He won the election in the state in September 2020.

Meanwhile, in line with section 285 (10) of the 1999 Constitution, as amended, the 180 days stipulated for the trial court to conclude hearing on the pre-election suit will elapse on Sunday.