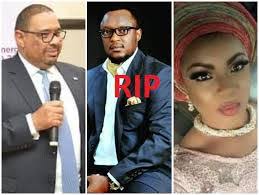 A businessman, Adetunji Iromini,on Tuesday said he never issued any statement on behalf of a former employee of FCMB Plc, Moyo Thomas, in response to allegations that she had two children for the financial institution’s Managing Director Adam Nuru.

The matter has been raging since the new year broke, with press releases from FCMB and various quarters on the matter.

One of the releases was attributed to Iromini, in which he was quoted as having risen in defence of the lady whose alleged dalliance with Nuru is believed to have led to the death of her estranged husband, Tunde Thomas.

However, Iromini described the release attributed to him as “made up lies,” and threatened to sue a platform that carried the item.

In a tweet to the platform, he stated: “Disclaimer: Report credited to me here like many other platforms are all made up lies. @tngreports you shall be sued.”

Responding to a request from our correspondent for a detailed press release, he replied: “I have issued disclaimers. My personality was used to give credit to the stories.”

The report titled: “Trending: Moyo Thomas, lady in paternity scandal involving FCMB’s boss shares own side of story,” is posted below:

twist has occurred in the case of sexual infidelity rocking the First City Monument Bank (FCMB), whose Managing Director, Nuhu Adams, is alleged to have fathered two children with former female worker and wife to another banker.

Moyo Thomas, wife of Tunde Thomas, believed to have died of heartbreak sustained on learning the news that the children he had nurtured over the years did not belong to him, has denied the streak of stories emanating from the sordid affair.

Though she did not come out openly to comment on the matter, a statement from a group of people believed to be her surrogates, close to her family, have come out to clarify some of the developments, including that the ex-husband was still close to the children and still spoke to them a few weeks before his death.

However, she was quite silent on the FCMB boss in the whole narrative, particularly on whether she actually had any sexual relationship with him, even though she insisted that the children belonged to her deceased husband.

Adetunji Iromini, who anchored the reaction on behalf of the family, warned the public to be wary of a sponsored petition on change.org which they described as a wicked assault on Tunde’s cherished memory.

Part of the statement, read: “This is quite unfortunate in many ways. It does not augur well for the memory of the departed soul especially as we are all grieving the loss of Tunde, who was buried on Wednesday 30th December, 2020. The pictures of the children are being posted in the social media, without care.

“There would not have been any need to respond to issues raised in the petition but for the sake of posterity, the memory of Tunde and for the sake of his children. Like any marriage, there were differences between Moyo and Tunde leading to their separation and eventual relocation of Moyo to the USA in December, 2017.

“It is important to note that the divorce process was never thought of or initiated by Moyo. And to the best of our knowledge, no divorce papers were ever served on Moyo. This means that they were still legally married. In the opinion of Moyo and her family, the channel for reconciliation was still open up until Tunde’s unfortunate demise.

“Tunde is the father of the 2 children and Moyo never told him he was not their father. Moyo and Tunde clearly worked to ensure the differences they had did not affect the relationship they respectively have with the two children.

“Tunde paid a visit to the USA to visit the children in June 2018. He met them and interacted with them unhindered. This was after his recovery from the stroke he had earlier that year. He was in touch constantly with the children, calling and having fatherly conversations with them, even at odd hours, at least twice every month from December, 2017.

“The last of such calls took place on Thanksgiving Day on 26th November, 2020. You will agree that this does not paint the picture of a man who had been told he was not the father of his children as was maliciously stated in the petition and is being circulated on social media.

“It is very sad that a group of people have decided to take the differences between a married couple and misrepresent it into a sensational story. It is unfair to have the pictures of his young children splashed all over the internet.

“Tunde had a mild stroke in 2018. By the grace of God, he was able to fully recover from this and carried on with his life. He was obviously doing well at his job and was in another relationship with a lady who was pregnant before his death.

“Why he had a cardiac arrest that led to his eventual death almost 2 years after remains a mystery that only God can provide answers to. “We can begin to postulate on possible reasons, but we would rather not, to preserve the fond memories of Tunde.

“Tunde has now gone to be with his maker. We do wish his family and friends, including his pregnant girlfriend, the fortitude to bear the unfortunate loss. He has now been laid to rest and we implore all to allow those grieving his loss, including Moyo and his children, to do so in peace. May Tunde’s soul rest in perfect peace. Amen.”