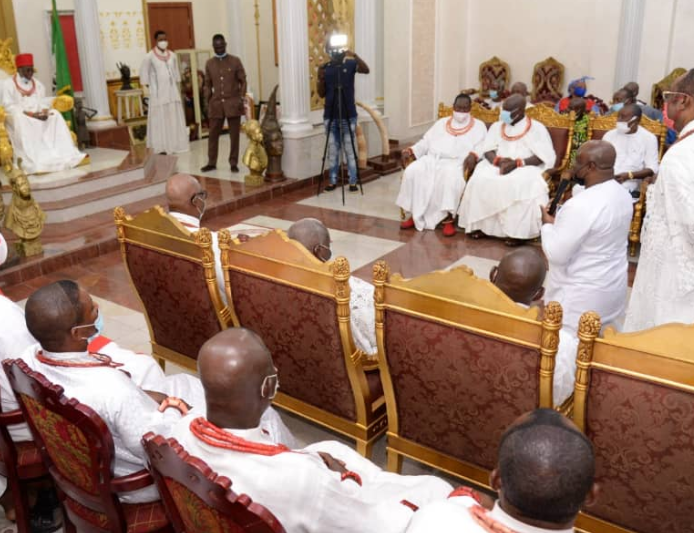 Former Edo State Commissioner for Arts, Culture, Tourism and Diaspora Affairs, Osaze Osemwengie-Ero, has reiterated the need for increased awareness and collaboration among stakeholders to ensure the release of over 300 Nigerian youths illegally detained in Italian prisons for trumped-up charges on mafia-related offences.

The ex-commissioner gave the charge when he visited the palace of the Oba of Benin, His Royal Majesty Omo N’ Oba N’Edo Uku Akpolokpolo, Oba Ewuare ll, to thank the Benin monarch for his prayers and support during his incarceration in Italy.

According to him, “I was on official trip to Germany when I was arrested in Amsterdam where I spent three months fighting extradition to Italy where I was accused of being a mafia boss involved in importation and exportation of firearms, human trafficking, kidnapping, drugs and other serious crimes.

“I want to thank the palace for all the prayers and blessings which I felt while in prison in Italy. The prayers led to my release on the 29th of May 2021.

“I wrote a letter to your Royal Majesty and I felt the palace prayers; I am home now exonerated, discharged and acquitted. The Ministry of Arts, Culture and Diaspora Affairs has transformed the state through culture and it’s now a pride of Governor Godwin Obaseki’s administration. I couldn’t have been here today without your support,” he stated.

Noting the trauma his family suffered as a result of his ordeal, the former commissioner said the news of his arrest and subsequent rumour of his alleged offence threw his father into a coma for five days but thankfully God saved him, adding, “When I spoke to him, he told me that His Royal Majesty spoke with him and said His Majesty supported me, knowing that I am not a criminal”.

He continued: “I am happy to be here today because I was held in Italian maximum security prison for 18 months for a case I knew nothing about. We have over 300 Nigerians in the same prison for same alleged offence; some are awaiting trial, while others have been sentenced to 9, 10 and even 15 years in prison.

“The corrupt justice system of Italy has convicted innocent Nigerians without the intervention of the Nigerian Government as it’s not taken the issue of Nigerians in Italian prisons seriously.”

Earlier, the Oba of Benin expressed delight over the release of Osazee Osewengie-Ero, adding, “I want to appreciate you and your family for remembering to come to thank the palace for the prayers, but all praises go to the ancestors. We are happy for your family and all those who prayed for you.