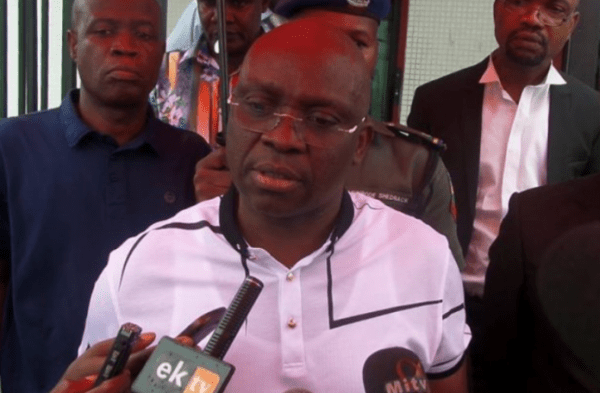 The leadership of the Peoples Democratic Party in Ekiti State under the chairmanship of Hon. Kehinde Odebunmi has dissociated the party from the statement credited to the former Governor Ayo Fayose’s faction, attacking Governor Seyi Makinde of Oyo State.

The party expressed displeasure over what it described as “destabilisation tendencies” of the former Governor, saying it was necessary for Fayose to acknowledge the fact that the party is not his private business where he gives order to the Party’s Exco to attack his perceived enemies.

In a statement made available to the media in Ado-Ekiti, the State Publicity Secretary of the party, Chief Sanya Adesua, said the party, which has only one sitting governor out of the six states in the zone, could no longer afford destabilisation engagements among its members, ochestrated by individuals who assume ownership of the party, but prefer leaders and members working collectively to forestall any distraction from its focus of winning elections for the party and providing quality leadership for the people of the dtate.

“We are using this medium to appeal to all our leaders across the South-West Zone, especially those who are aggrieved for one reason or another, to please give peace a chance in the best interest of the party and the populace.”

The party said there was no controversy regarding who is the leader of the party in the Southwest as the  PDP’s Constitution and the convention of the party have conferred this on Gov. Seyi Makinde of Oyo State.

“Gov. Seyi Makinde is the leader of PDP in South-West and the Ekiti State Chapter is solidly behind him. This is not to say that former Governor Ayo Fayose can be wished away in the scheme of things as one of the party leaders in the zone, but he should understand that he does not own the party and as such, should respect the existing political organogram/arrangements which he once benefitted from, as the only elected PDP Governor in the zone between 2014 and 2018.

What we expect from him is to give Gov Makinde the same support he enjoyed from PDP leaders across the zone, when he (Fayose) was at the helms of affairs instead of working against the progress of the party.”

The party expressed surprise at the allegations levelled against Makinde “by the other group that he is the one sponsoring us in the lawsuits we instituted against the party for unlawful manipulation of our Congresses in Ekiti State to favour them. This is laughable, and confirms our suspicion that Fayose decided to move against Gov Makinde, when he couldn’t get him to support his unconstitutional takeover of the party structure in Ekiti State. We know former Gov Fayose does not believe in a free and fair party Primary/Congress but a manipulated process and does not like to be challenged.

“For emphasis, those being paraded by Fayose as representatives of Ekiti PDP SWC are merely members of his Osoko Political Assembly (OPA), an association which must dance to only his tunes. As a result whatever it does or any decision taken by any of them or by all of them does not represent the position of Ekiti State PDP, rather a sole decision of Mr Ayo Fayose as an individual.

We hereby wish to salute the courage of Gov. Seyi Makinde, and appeal to him to remain steadfast and focused in his efforts to bringing the party back to the right path of honour where every member would be proud of, which is “give Justice to all, in order to enjoy Unity, without which the zone cannot Progress” (This is our party’s Motto as clearly stated in her Constitution).”