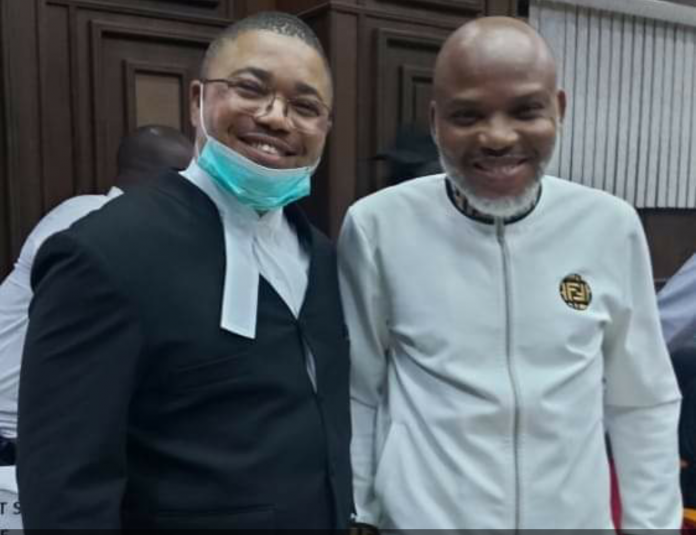 Department of State Services has ignored orders issued by the Federal High Court in Abuja to feed the leader of the Indigenous Peoples of Biafra Mazi Nnamdi Kanu and ensure adequate provisions for him while in its custody.

The court had issued the order on Thursday December 2, 2021 at an emergency hearing on the matter.

Kanu’s lawyer, Ifeanyi Ejiofor, raised the allegation in a Facebook post providing an update on the legal team’s visit to the IPOB leader on Monday.

He said DSS had refused to give Kanu food between Sunday and Monday, contrary to the orders of Justice Binta Murtala-Nyako and vowed to report the matter to the court immediately.

It reads: “The routine visit to our Client – Onyendu Mazi Nnamdi Kanu was conducted today, 6th December 2021 and in his usual practice, he extended his compliments to his millions of supporters. He remains profoundly grateful for your support and solidarity thus far.

Sadly, we observed with dismay, and indeed very worrisome that notwithstanding the far reaching orders made by the Court on the 2nd of December 2021, the detaining authority being the DSS have in their usual style, flouted and/or ignored the said court orders.

We were informed by our Client – Onyendu Mazi Nnamdi Kanu that none of the pronouncement made by the Court on the 2nd of December 2021 has been obeyed by the lawless DSS. They have unrepentantly continued to treat the Orders of the Court with greatest disdain.

Our Client – Onyendu Mazi Nnamdi Kanu further informed us that he had not eaten anything since Sunday , apparently being punished because we dared to complain to the court about the harsh condition under which he is being held in custody. But, very unfortunately, this should be the height of their reckless affront to the orders of court.

At the time Her Lordship made these far reaching orders in open court, I did not mince words in bringing to the attention of the court that the operatives of the DSS will flout these orders, pursuant to which the court specifically directed me to come back to her with these facts if her order is flouted by the detaining authority.

Interestingly, we will be approaching the court immediately with this terrifying development, which is totally unacceptable, grossly condemnable, and intolerable.

The facts must be placed in their proper perspectives: Our Client – Onyendu Mazi Nnamdi Kanu has not been convicted for committing any crime, he is still presumed innocent of every unfounded and frivolous allegations against him, and as such, the DSS has no power whatsoever to whittle down the enjoyment of any of his rights clearly protected under Chapter 4 of the Constitution.

The detaining authority (DSS) is an Agency clearly established by instrumentality of the laws and should operate within the confines of the same laws establishing them, and should not be seen as a lawless entity, which unfortunately is what they represents in practise.

We hereby, demand without further ado, for the immediate compliance with all the orders of the Court clearly made on the 2nd of December 2021 and thereby state further that any attempt to violate these orders must be faced with strict sanctions by the Court, having commenced the process incidental thereto.

We respectfully wish to assure our Client’s teeming supporters that we cannot leave anything to chance towards ensuring that our Client is sufficiently protected and his rights are upheld. The DSS must and shall certainly operate within the confines of the laws.

Be assured that we are not resting on oars whatsoever, to ensure that our Client is unconditionally released. This strategy isn’t being discussed here, but it will happen soon.

Thank you UmuChineke for always giving us your listening ears, it shall certainly end in VICTORY.”