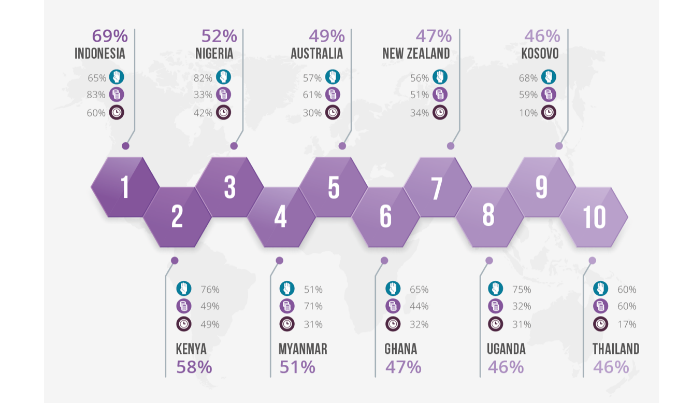 A new report says Nigerians are the world’s third most generous people after Indonesians and Kenyans.

The survey also shows that a number of developed nations such as United States, United Kingdom and Canada had significantly dropped off the most generous people index due to the COVID-19 pandemic.

The full report: “An annual survey of global generosity has laid bare the ravages of the Covid-19 pandemic on charitable giving as five major western economies fell out of the top 10 most generous countries for the first time.

The Charities Aid Foundation’s World Giving Index is a global survey which has interviewed more than 1.6 million people since 2009 and asks each of them three questions: have they helped a stranger, given money or volunteered for a good cause over the past month? For this edition, data has been included for 114 countries, representing over 90% of the global adult population. The rankings produced are not based on the amounts given or the number of volunteer hours spent.

The survey found that the world’s most generous country is Indonesia, which also topped the list in 2018. It is followed by Kenya and Nigeria.

This year’s survey highlights the impact of lockdowns on charitable giving as the USA, Canada, Ireland, the United Kingdom and the Netherlands all fell out of the highest rankings. Only Australia and New Zealand, where the survey was undertaken in the weeks before the first wave of the pandemic took hold, maintained their top 10 rankings.

§ Several countries have moved up the rankings and make their first appearance in the top 10, including Nigeria, Ghana, Uganda and Kosovo – but whilst their overall giving scores have increased somewhat, their rise up the Index is driven by the relative decline of other countries.

§ Communities around the world mobilised to help fellow citizens as the pandemic took hold, resulting in the highest ‘helped a stranger’ figures since the index was first launched in 2009. More than half (55%) of the world’s adults – or 3 billion people – reported helping someone they didn’t know in 2020.

§ Similarly, more people donated money in 2020 than had done so in the last five years (31%). Levels of volunteering in 2020 are broadly unchanged at the global level.

In a special 10th anniversary report released in 2019, the United States of America was the world’s most generous country over the previous decade and seven of the 10 most generous nations were among the world’s wealthiest.

“This year’s World Giving Index makes for sombre reading as it lays bare the lost potential to support charities that was the result of lockdowns around the world.

“They undoubtedly saved many lives, but for charities that relied on fundraising events, on spontaneous cash donations and on an army of volunteers, the shuttering of economies has had a profound, and lasting impact.

“While we commend the countries that have moved up this year’s index – and the people reflected in these numbers who gave generously of their time and money – we know that there is a job to be done to rebuild societies ravaged by the loss of funds going to charities, particularly from the world’s larger economies.

“We are hopeful that the tremendous levels of generosity that we have seen across our network will translate into a new era of support for the charities that have been there for communities when it mattered the most.

“We are committed to playing our part to get vital funding to charities and, in so doing, to accelerating social progress across the world.”

The CAF World Giving Index is based on data from Gallup’s World View World Poll, which is an ongoing research project. For this edition, data has been included for 114 countries, representing over 90% of the global adult population. The survey asks questions on many different aspects of life today including giving behaviour.

In March 2020, Gallup paused data collection worldwide as it assessed risk in the face of the emerging pandemic. In May 2020, Gallup initiated contingency data collection plans, replacing face to face interviews (the usual data collection method in Central and Eastern Europe, Latin America, former Soviet states, developing Asia, the Middle East and Africa) with telephone based interview. This change is not considered to have had a material impact on the findings detailed in this report.

CAF is a group of three charities based in Canada, the United States of America and the United Kingdom specialising in safe and effective cross-border giving. Together, we work with companies and philanthropists to support them to ensure that money reaches the causes at the heart of their giving plans. In the UK, CAF also operates CAF Bank, offering dedicated banking and support to more than 14,000 UK-based charities.”