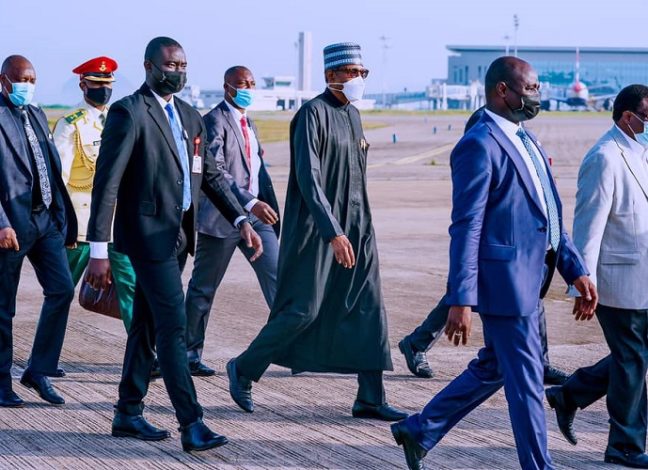 PRESIDENT Muhammadu Buhari, on Sunday, travelled to New York to participate in the 76th Session of the United Nations General Assembly (UNGA76).
He is to spend eight nights in the United States and is scheduled to return Sunday, September 26.

Special Adviser to the President on Media and Publicity Femi Adesina announced that the session opened on Tuesday, September 14, but Buhari would address the General Assembly on Friday, September 24.

The 76th UN general meeting is themed, ‘ ‘Building Resilience Through Hope – To Recover from COVID-19, Rebuild Sustainably, Respond to Needs of the Planet, Respect the Rights of People and Revitalise the United Nations.”

He and his delegation are expected to partake in other important meetings such as the High-Level Meeting to Commemorate the 20th Anniversary of the Adoption of the Durban Declaration and Programme of Action on the theme ‘Reparations, Racial Justice and Equality for People of African Descent.’

“The delegation would also participate in Food Systems Summit; High-Level Dialogue on Energy; and The High-Level Plenary Meeting to commemorate and promote the International Day for the Total Elimination of Nuclear Weapons.

“The President will also hold bilateral meetings with a number of other leaders of delegations and heads of International Development organisations,” Adesina stated.

The presidential aide announced the delegation to include the Minister of Foreign Affairs Geoffrey Onyeama; Attorney General and Minister of Justice Abubakar Malami (SAN); and Minister of State for Environment Sharon Ikeazor.

Other world leaders are expected to attend the global conference.

On Monday, September 20, the global stakeholders will mark the Sustainable Development Goals Moment. Convened by the UN Secretary-General Antonio Guterres, the Monday meeting is expected for leaders to discuss ‘plans, actions, and solutions,’ required to end the Coronavirus Disease (COVID-19) pandemic, in order to refocus member nations back to the global goals – SDGs.

The Food System Summit is particularly described as the first of its kind. It is to hold on September 23, and it would focus on five major objectives.

They are to: “Ensure access to safe and nutritious food for all; Shift to sustainable consumption patterns; Boost nature-positive production; Advance equitable livelihoods; and Build resilience to vulnerabilities, shocks, and stress.

“The Summit aims to empower all people to leverage the power of food systems to recover from the COVID-19 pandemic and implement the SDGs, by mobilizing actionable commitments to transform food systems.”