Indications emerged on Tuesday that Britain may grant asylum to the leader of the Yoruba Nation movement, Chief Sunday Adeyemo aka Sunday Igboho.

The activist had applied to Britain for asylum and was on his way to the European nation when he was intercepted by Beninoise authorities.

He was subsequently detained.

However, his lawyers and supporters have mounted a strong opposition to any attempt to extradite him to Nigeria.

One of his lawyers based in Texas, United States, Leesi Ebenezer Olarewaju, said Benin Republic had no reason to extradite Igboho because he had not committed any crime in its territory.

“He was arrested under false alarm raised by the Nigerian government. We are on top of the situation right now. We have successfully notified the British government of the dangers of letting Sunday Adeyemo returned to Nigeria where his life is at risk. We believe that before the end of today, Britain would have granted his request for asylum in good faith.”

He stated that Igboho’s asylum request would be granted by Britain and that Benin Republic would be convinced to allow him continue to Europe. 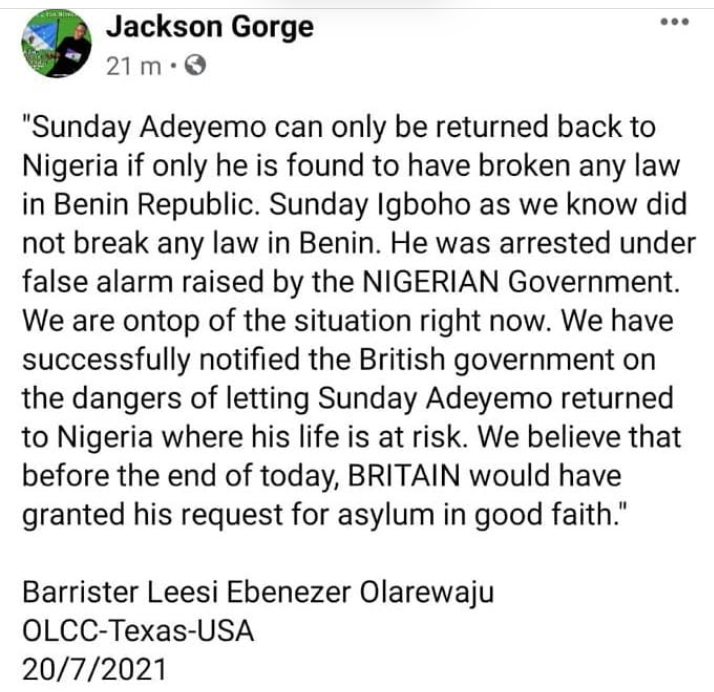