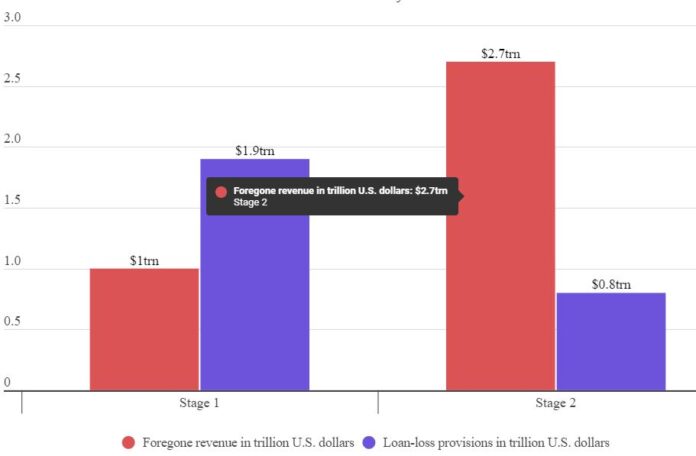 For the global banking industry, the potential for economic recovery in the near term remains uncertain. The pandemic is set to pose a double-pronged problem for the industry in the months and years to come.

According to the research data analyzed and published by Comprar Acciones, in the first stage, banks will suffer severe credit losses. During the period between 2020 and 2021, foregone revenue will amount to $1 trillion. Loan loss provisions for the same period are projected to reach $1.9 trillion.

The second stage is estimated to run from 2020 up to 2024. Within that five-year period, banks are estimated to lose $3.7 trillion of revenue.

Based on the report, this is the equivalent of over six months of industry revenue that will be lost and never recovered. This figure is the base scenario and could go as high as $4.7 trillion.

A revenue loss of $3.7 trillion would be a 14% fall compared to pre-pandemic growth projections.

During the third quarter of 2020, banks around the world set aside $1.15 trillion as loan-loss provisions (LLPs). This was much higher than the amount provisioned throughout 2019.

Due to forbearance programs and government support, banks have yet to take substantial write-offs. But McKinsey points out that this state of suspended animation is unlikely to last forever. Based on its base scenario, in the coming years, LLPs will surpass those of the Great Recession.

US Banks Loan Loss Provisions to Soar to $318 Billion between 2020 and 2022
However, a Deloitte report points out that for the banking industry, the economic impact of the pandemic is not on the same scale as that of the 2008 Global Financial Crisis (GFC).

In the first three quarters of 2020, LLPs jumped in all major economies but remained below the levels seen in the GFC.

Losses are to be expected in every segment. But the report highlights that they might be most acute for the credit card category as well as for SMB loans and commercial real estate.

60% of the losses forecast in the report are expected to take place in APAC. From the $926 billion increase in credit losses in 2020 and 2021, APAC will account for $518 billion. China will dominate with $398 billion in credit losses.

According to SP Global, pre-provision earnings should be able to absorb the losses. Further upticks would, however, take a toll on banks’ ratings, with some recording net losses.

For the top 100 banks in North America, APAC and Europe, the estimated average ROE could fall by three percentage points to 6.8% in 2020.

In North America and Europe, they are not expected to recover to pre-pandemic levels in the near term. However, in APAC, they might get close to the pre-COVID average of 9.2% by 2022.

On the bright side, COVID has accelerated digitization trends. Based on the Deloitte report, 44% of retail banking customers claim to be using their primary bank’s app more frequently. For Brazilian digital bank Nubank, the number of accounts rose by 50% to 30 million.

Bank of America reported a 117% increase in check deposits via mobile on its business banking app. During H1 2020, Standard Chartered posted a 50% growth in retail banking digital sales.

Over the coming year, 48% of banks surveyed by Deloitte are planning to incorporate live customer interactions with bank employees via ATM. 46% are considering changing self-service touchscreens into contactless kiosks to facilitate transactional services.