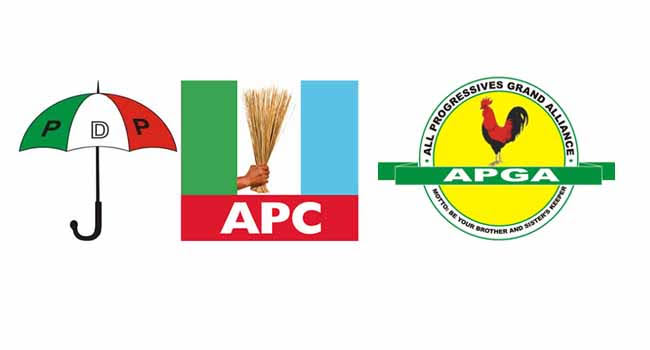 Anambra State Government on Sunday mocked the Peoples Democratic Party and the All Progressives Congress for conducting sham governorship primaries.

Commissioner for Information and Public Enlightenment, C. Don Adinuba, in a statement said it was in contrast to the widely televised primaries of the All Progressives Grand Alliance that produced Prof. Chukwuma Soludo as its candidate.

The statement titled: ‘APC & PDP Congresses are Foreboding Enough,’ reads: “The Government and people of Anambra State have watched with concern the attempts by two of the major political parties in the state to hold their congresses as a critical step to their participation in the November 6 gubernatorial election in the state. After the ruling All Progressives Grand Alliance (APGA) held its successful, peaceful, transparent, free and fair congress on Wednesday, June 15, which produced the former Central Bank governor, Professor Chukwuma Charles Soludo, as its flag bearer in the forthcoming election, the least the Nigerian people expected from both the Peoples Democratic Party (PDP) and All Progressives Congress (APC) was to follow in the APGA footsteps by organizing credible congresses which would help deepen the culture of peace, stability and solidarity in the state. The APGA process was shown live on television networks.

2. It is regrettable that the attempts at holding these vital congresses yesterday, Saturday, June 26, were marked by confusion, chaos, late or non-arrival of electoral materials, outright stealing and total disregard for the laws of the land. For instance, the PDP held two parallel congresses, one at Paul University premises and the other at Professor Dora Akunyili Women Development Centre, both in Awka. While the faction led by a businessman, Chief Chris Uba, produced Dr Ugochukwu Uba, a former senator and the eldest brother of Chief Chris Uba, as the PDP flag bearer, the faction led by The Honourable Ndubuisi Nwobu who conducted the congress at Professor Dora Akunyili Women Development Centre declared Mr Valentine Ozigbo, an otherwise decent former corporate executive, the winner.

3. It is tough for the Government or people of Anambra State to congratulate the supposed winners of these parallel congresses. Each group suffers a grave legitimacy crisis. From the look of things, the Nwobu-led faction is no longer recognized in the eyes of the law. The Federal High Court in Abuja has twice in the last couple of days passed judgments declaring its existence illegal. The court brought back the state executive committee in office as of 2017, that is, the Chris Uba group. Yet, most prominent members of the PDP in the state belong to the Nwobu faction. Even the group sent by the PDP national leadership to conduct the primary election worked with the Nwobu faction rather than the group favoured by the judicial pronouncement. Can these prominent Nigerians, including Edo State Deputy Governor Phillip Shuaibu, who is the chairman of the electoral panel, be said to have flagrantly and brazenly defied a court order in public?

4. On the other hand, if the order obtained by the Uba group is legitimate, why are no PDP members of consequence identifying with Uba and his acolytes? Worse, it is curious that this faction should produce the elder brother of its leader as the gubernatorial nominee. Has politics in our state become so incestuous?

5. Anambra people are genuinely concerned about developments in the PDP because it is a major party in the state and elsewhere. Two of its aspirants, namely, Chief Emeka Etiaba, SAN, Dr Tony Nwoye, the defeated APC candidate in the November 17 2017 governorship race, announced their withdrawal from the gubernatorial race when the accreditation for the congresses had started. They complained bitterly of the manner the congress was being conducted as well as some unhealthy developments in the party like five legal suits and countersuits. This was after each person had paid a whopping thirteen million naira (N13m) to be in the race.

6. As though to exacerbate the situation, there are media reports that Dr Godwin Maduka, a successful doctor in the United States and philanthropist who is one of the aspirants, was ripped off a whole four hundred and fifty thousand dollars ($450,000) cash meant to use to lobby delegates to vote for him. The heist, according to news reports, were by his own staff and aides. If these reports are true, the heist has brought so much shame to PDP members in the state. It has also dented the image of Anambra people. We hope and pray that the reports are highly exaggerated or not true at all.

7. Controversial as the parallel PDP congress has been, the APC congress looks more foreboding. Thirteen out of the 14 aspirants issued a statement yesterday vowing that there were no primaries either in the local government areas or at the state level which Senator Andy Uba could have possibly won. APC officials like LGA chairmen and secretaries claim that there were no voting materials anywhere. Independent reports confirm that there were no electoral materials up to 5.30 pm yesterday. Senator Chris Ngige, the Minister of Employment and Productivity who has been the state governor, says the 13 aspirants are right, supporting their call for another day for the party’s primary election.

8. The APC and PDP congresses have profound implications for democracy and progress in Anambra State in particular and Nigeria in general. The congresses have revealed that there are still actors in high places determined to perpetrate the culture of impunity which is arguably the biggest threat to our existence as a nation. Until now Anambra people had been under the illusion that gone were the days when some individuals would sit in the comfort of their hotel suites and write the results of elections not just in their political parties but also in nation regardless of the people’s preferences which ordinarily should be regarded as sacred and supreme. The issues of parallel congresses, legal suits and countersuits as well as utter disregard for judicial pronouncements are equally questions which no persons can overlook.

9. The APC and PDP in Anambra State are advised to put their house in order. Their congresses yesterday were anything but transparent and so lacking in credibility that even a leading national television broadcasting station which intended to broadcast the congresses live, as in the APGA case, stopped after an hour because of the higgledy-piggledy manner in which the entire business was going on. To ensure that the tremendous progress in the areas of peace, stability and development which the Anambra people have made in the last decade continues, the national leadership of both the APC and PDP should cancel the so-called congresses of yesterday and organize credible ones within the next few days. The congresses are foreboding enough. No groups of persons in the state should be allowed to remind our people of the years of hooliganism, lawlessness and election rigging. Those years should not be brought back. Anambra people will not take kindly to any persons who dare to restore the culture of impunity.”