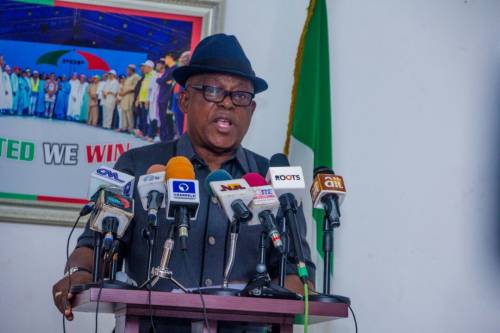 In a letter to Akinwonmi, the embattled chairman said: “I hereby request you to preside over the National Executive Committee meeting of the Party, taking place today, 28th August, [email protected] 12 noon, in my absence.

A high court in Degema Rivers State had earlier this week removed Secondus from office.

This was upturned by a high court in Kebbi State on Thursday.

However, another high court in Cross River State on Friday ordered him to vacate office.

The party’s National Caucus had at its meeting on Friday in Abuja directed erstwhile Senate President David Mark to chair a committee to examine the court rulings and reconcile the parties.

At the NEC meeting, the party said its national convention scheduled for October 30-31, 2022 would hold in Abuja.

Members of the convention committee will be named on September 9 at another NEC meeting, according to the party’s spokesman, Kola Ologbondiyan, at a press conference in Abuja.

The party also condemned the harrassment of journalists and Jesus outfits by the Buhari regime in its “desperate attempt” to muzzle the press.